A good sports field is more than just the quality of turf which forms its surface, how well it drains and how resilient it is to wear. Painted lines define a specific sport and add to user groups’ enjoyment of the field.

Brent Baker, president of Simplistic Lines Inc. of Stratford, Ont., spoke in September at the 28th annual Sports Turf Canada fall field day in Hamilton about the value of field line marking and how properly-marked lines can enhance a field. 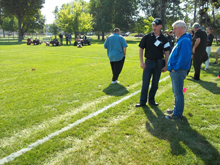 “Good line work is going to validate your municipality’s image and the club’s,” Baker said. “Several clubs have said they’re known because they have good lines and turf.”

Field markings have to represent a fair compromise between user group requirements and field maintenance needs, he said. Sports clubs can be demanding about certain things, but sports turf managers must also deal with the maintenance of their fields.

Markings, in essence, create the field of play. A field grown to healthy turf can be deemed a failure if its lines are not straight.

Baker said he has also seen good lines painted on bad turf, “and it’s not going to work.”

He suggested municipalities meet with user groups to find out which lines are really necessary for their particular sport. Some lines aren’t necessary while others are needed.

Sometimes, municipalities can get “a little lost” with user groups, including house leagues. Boundaries are a necessity and allow game officials to see the lines so that they can ensure accuracy.

The life expectancy of field markings varies, and it must be decided if lines will be permanent or temporary. Many get used to painting a typical seasonal soccer pitch or football field for it to stay the same all the time. Yet rule changes may be made, enrolment in clubs can change, and fields must work with the age groups of the players. These present a challenge for sports turf managers, Baker said.

He said the objective is not to damage the turf when marking a field and not to hinder usual turf management practices.
An important consideration to make when planning permanent line markings is to refrain from putting down too much material on the turf. Baker said it shouldn’t get too far down into the soil because it acts the same as thatch.

If a field is used for two or more distinctly different sports, it will require specific lines pertaining to each one. To avoid confusion, it might require three different colours in one field is to be used for soccer, football and field hockey. White is the most economical colour available, which might be used for the most prominently played of the three, yet two other colours will have to be incorporated. Baker said such an arrangement makes it difficult for both players and game officials.

Latex paint is a popular choice for marking lines because of its environmental friendliness. It works well for necessary changes and is semi-permanent.

“The problem is we’re dealing with a surface that grows.”

The quantity of paint required depends on the number of fields needing lines, the size of the fields and the number of different sports played on each one.

“The sport itself can really make a big difference in how much paint you use.”

Sports turf managers must also keep in mind who will be painting the lines as this is also likely to have a bearing on amounts required. It may be the turf manager’s own staff doing the work, a private company or perhaps even volunteers representing the user groups.

Before a field is marked with game lines, precise measurements must first be made. Devices such as tape measures or metering wheels are often used, but Baker cautioned that if a wheel is chosen, the municipality should invest in a good one. Accuracy can be compromised with a cheaper model which can succumb to defections. Better metering wheels will also usually provide both British and metric units of measure.

For a standard marking layout, Baker recommended the job be done by three people.

“If you go less than that, you’re going to lose efficiency.”

To prepare for marking lines, stringing is a cheap yet effective way to ensure pre-painting precision. Using a laser eliminates the need for string and will ensure straight lines when following the beam.

The means in which paint is delivered will depend on whether a field is natural or synthetic. There are options with natural fields. Mechanical applicators will physically touch the turf as it applies paint. Spray applicators will deliver a specified width of paint without touching the turf.

With natural turf, the challenge is that the field’s surface is not flat.

“It’s a growing surface, and you need to get paint down into the turf. You need to penetrate it and get good coverage. It’s all about the coverage on the blade of grass.”

If coverage is provided only to the top of the surface, people will assume the paint is fading as the grass grows. Baker said it isn’t, and it’s simply the actual grass coming up through the paint which gives a green look.

“We need to get it down in, but we don’t want to get it in so much or waste paint so much that we’re penetrating the soil. It’s just going to sit on the soil and it’s like thatch.”

An atomizing paint which is sprayed down in the surface works best, he said.

On synthetic turf surfaces, paint doesn’t need to get down into the blade as much because it’s a surface which doesn’t grow.
“The important thing is we don’t waste paint.”

High-pressure spraying is effective for that, but it’s important to refine how much paint is put down, Baker said.

The application rate is largely governed by the paint’s viscosity. With certain applicators and thick paint, there is a tendency to apply a greater amount which makes it more difficult to control the application, he said.

Aerosol cans mounted to push carts are handy for quick markings and work well for smaller clubs. They also make it easy to change colours and provide for fast drying, Baker said. For larger operations, bulk paint is a cheaper method, but if it’s not atomized the cost savings aren’t fully realized.

Aerosols have their shortcomings, however, Baker admitted. They are flammable and generally use propane as a propellant. Cans are also susceptible to plugging at the tips and it’s not unusual to be midway through a can and have to discard it.

For latex spraying applications, there are usually both high and low-pressure sprays. Low-pressure spraying is considered to be between zero and 100 pounds per square inch and can be propelled by compressed air, carbon dioxide tanks or diaphragm pumps.

“Purchasing departments are very keen on trying to get the lowest cost on paint as possible, and if you decide to use a low-pressure spray applicator to try to get the penetration and to atomize your paint, you’re going to be going against yourself if you get a paint that’s having a problem with settling or the pigment is too abrasive. If the pigment is not thin enough to go through the filtration system on these units, then you’re going to run into a lot of plugging problems.”

High-pressure sprayers aren’t a great deal different from low-pressure units, but spray higher, and the atomization rate is the best available, Baker said. He added sports turf managers who are trying to get the most out of their paint or are trying to atomize it, high-pressure sprayers are good to use, but a good quality of paint will be needed. Once attempts are made to atomize it, it will break down. If that happens, the desired brightness won’t be realized.

“Keep in mind if you use a high-pressure applicator and you want to use a cheaper paint, you may not get the colour you want.”

Baker said there are advantages to using spray applicators on turf for the atomization process which is key for coverage and paint consumption. He added the amount of paint being put down is essentially based on the application speed of the individual walking behind the sprayer as well as the nozzle size and the unit’s particular system pressure.

The higher the atomizer, the better the paint quality that will be needed.

Paint has a thick viscosity, and the pump type’s efficiency can be maximized when it the suction line is at the bottom of the tank. Any suction line on an applicator should be at least double that of the output, Baker said. If it isn’t and a cheaper, thicker paint is chosen, or if the pigment is thicker, problems are bound to arise.

“Filter baskets are better than inlet filters. If you can filter the paint before it goes into the applicator, you won’t encounter as many problems because you’re filtering beforehand so you don’t have to sacrifice the efficiency of the pump pulling it through the filter.”

The spray nozzle location should be as close as possible to the fulcrum point of the applicator, he suggested. Essentially, wherever the applicator turns, there will be less deviation of the line.

Keep the weather in mind before setting out to paint, Baker cautioned. Painting should never be done in the rain. If a Friday game is scheduled and rain is forecast for Thursday, yet if Wednesday looks to be a nice day, painting should be done Wednesday. Once the paint dries, it will hold up and the following day’s rain won’t affect it much as long as it is dry.