The game would be boring if all courses looked the same.

Bunkers help give golf courses an identity and should be intimidating, architect Andrew Green suggests.

Golf is the only game defined solely by the ground on which it’s played, superintendents attending December’s 31st annual Ontario Seed Company and Nutrite-sponsored professional turfgrass seminar day were told.

“The more exciting and more interesting that journey is from the first tee to the last green, the more excited people will be to play the game,” golf architect Andrew Green of A.H. Green Design/Green Golf & Turf Inc. said in Waterloo.

The ground can be interesting without the need to make it complicated, he said, adding golf was originally conceived as a game to be played along the ground on the way it was set.

“The old guys (early 20th century architects such as A.W. Tillinghast and Donald Ross) understood how to get the most out of the property. They all utilized the ground in creative ways.”

Older generation golf course designers were restricted to rudimentary equipment, using the power of horses in many instances. This forced architects to think creatively about using the ground.

“We ended up with really iconic golf experiences that have stood the test of time.”

Once golf moved into the modern era and designers had access to more sophisticated equipment, “we began to overthink what we wanted to do,” leading architects to want to create interesting grounds.

“As architects got busier, a lot of times their production was showing similar things, meaning they were turning out a lot of repetitive ideas.”

Green said this changed the fabric of golf, adding many of the newer courses tend to look the same. Much of the public’s understanding of golf comes from what is seen on television.

He told the superintendents in the audience that their golf courses are completely unique, and there are no other golf courses “like yours.” Each part of a golf course has a certain lifespan and, like a car that will eventually need new tires, will need upgrades to tees, bunkers, irrigation systems and other areas.

“We need to communicate effectively that these things happen. Understand that at some point you have to reinvest in your facility.”

The length of a golf hole doesn’t determine interest, excitement or level of difficulty, Green said, citing the seventh hole at Pebble Beach as an example.

“That golf hole was a whole other level of unique when it was built. Time has changed it.”

The game would be boring if all golf courses looked the same, he said.

“Being unique and being like yourself is important. A lot of times the people we answer to want us to be like somebody down the road.”

Golf courses that want to “rock” need to break the rules, he said, adding people coming into the game think about it in different ways.

“For me as an architect, this is the most important statement ever written about what I do. My job is designed for us to hold your interest and make you think. I want you to go from the first tee to the last green, and I’m going to give you all kinds of problems and you have to figure out how to solve them.”

Good golf architecture allows everyone to utilize his skills to be successful, and superintendents should be inspired to make their golf courses better, Green said.

When designing par three holes, he said his preference is to create a short hole, one that is mid-short, one that is mid-long and another that is long – giving golfers four distinctly different experiences while playing holes of the same par. He added the game should be enjoyable for those who play it, and finding the right distance is an important consideration, even if it means playing from the forward tees. 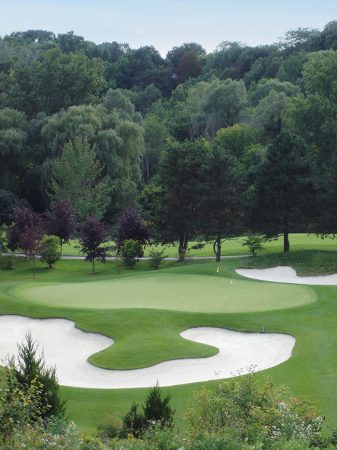 Golf course trees
Trees are often part of the golf experience on a course, but the notion of removing them can be a touchy subject among board members. Green said he hopes the previous tendency to overplant trees on golf courses has come and gone. Sharing with board members the need to cut some trees to reduce the amount of shade being cast on greens is vital, he said, adding it’s a better alternative to reinvesting in greens.

He suggested golfers should look up rather than down the fairway and see the potential problems that exist with trees. The mindset must be geared toward long-term thinking.

“If you’re going to plant a tree, don’t plant it for tomorrow. Plant it for two or three decades from now.”

Bunkers can pose a challenge for superintendents lacking the necessary labour force and materials to maintain them. They can be “demoralizing” for a superintendent and his staff during heavy rain events and are possibly too complicated. Green said there is a balance between how bunkers are designed and how they are maintained, noting studies continue to show that bunker maintenance is costlier than greens upkeep.

“That makes no sense,” he said, referring to golf courses that spend too much time on bunker maintenance when staffing is lean. Such courses can adjust their maintenance schedules to simply rake out footprints, he suggested.

Bunker styling options
Bunkers need to be strategically positioned and thoughtful to inspire great golf, Green said. Those that aren’t are a waste of resources. He said there are two options for the overall styling of bunkers.

One is to flash the “heck” out of the bunker with sand as high as possible. By utilizing good liners, he said, the sand won’t move.

“If there is no water going into the sand from outside, it’s like a pile of sand in a parking lot. Any rain that hits it is going to move through and there won’t be enough velocity of water to move the sand off the face. Liners and high sand flashing actually work pretty well and there’s a lot less grass to have to hand water, mow and string trim.”

The cost of liners, however, will be an issue, he added.

Green said another bunker styling option is to adopt a grass face with sand sitting at the bottom, giving courses that can’t afford liners a viable alternative. He said that when water hits the grass, it filters through it and slows down before reaching the sand, giving the sand no place to move.

He said he has tried various types of liners, and all have a place in the market. Key considerations include soil type, sand type, design characteristics, how the bunkers are being maintained and the fabric liner. A properly installed fabric liner that is repaired immediately if it tears or is damaged by an animal “is going to perform pretty darn well” and is a cheaper alternative to a hard liner.

Hard liners, however, are a better option if a golf course is home to burrowing animals.

“Find what works best for you. There is no magic bullet.”

Using high performance sand, such as angular sand, will protect against fried egg and buried lies, but not all golf courses can afford the variety.

“Bunkers help provide an identity to your golf course. I like them to feel intimidating.”

Greens should also add interest to a golf course with unique shapes and contours, Green said. Putting surfaces evolve over time from the original setup. When contouring is restored, hole locations that were lost are found again.

“Greens should have interesting shapes and provide you with different hole locations.”

Greens that are only 10 years old will change over time. Having access to aerial photographs taken 10 to 15 years earlier will show how much they have evolved and will serve as a guide to help restore them to their original setup.

“Be unique with your properties and don’t be like everyone else. Our clients need to be excited and passionate.”

Green has been a senior designer on a number of high profile projects, including such courses as Shinnecock Hills Golf Club on Long Island, N.Y., Pine Valley Golf Club in New Jersey, Oakmont Country Club in Oakmont, Penn. and Merion Golf Club in Ardmore, Penn.

He is based in Forest Hill, Md.

Give golfers four distinctly different par three holes to play, giving them a unique golf experience on each one.