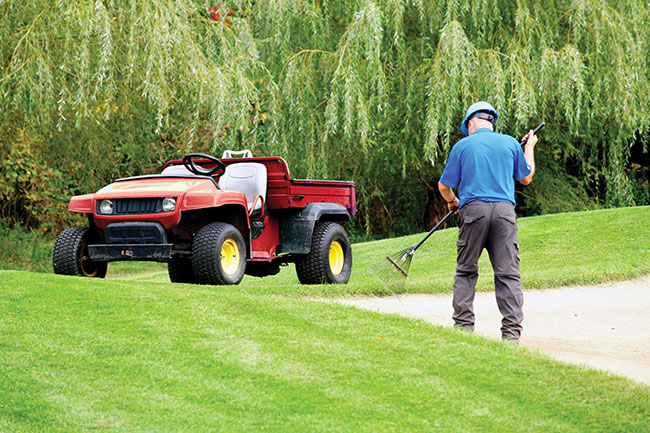 Maintaining golf course bunkers is one of the most labour-intensive chores for maintenance staff. Reducing the number of bunkers minimizes the time and labour needed to deal with washouts following a heavy rain event. Photo credit: Mario Beauregard/Adobe Stock

Although golf has experienced a resurgence during the COVID-19 pandemic – in terms of rounds played – course superintendents are still dealing with reduced labour issues and shrinking budgets that have impacted their inputs.

Renovation projects or new builds must have superintendents and architects on the same page to ensure design work and alterations incorporate such restraints.

A trio of Canadian golf course architects shared their views about designing with reduced staff and fewer inputs during the virtually delivered Canadian Golf Course Management Conference in March.

Andrew, who has worked to restore a multitude of golf courses designed by such luminaries as Stanley Thompson, Donald Ross and Robert Trent Jones, said that by thinking about how to move around a property, plenty of solutions can be found without undoing the visions of the original architects. Such “intrusions” superintendents may face on a golf course include having to cut around trees, dealing with steep slopes and ravines and not having good access points to reach greens.

“If you had an open field that was all fairway of 100 acres and you cut it, you can actually cut it with very little staff and not a lot of time,” he said.

Mingay, who has been working on an improvement project of late at the Richmond (B.C.) Country Club, said he has tapped into the mindset of Arthur Vernon Macan Jr., the original architect of the golf course. He noted Macan fell in love with Augusta National Golf Club at the time it was constructed in the 1930s, particularly relishing is bunker simplicity. The home of The Masters was built with only 22 bunkers but has almost doubled that number over the decades.

Macan, Mingay said, believed that slope, contour and angles, in addition to as few bunkers as possible, gives a golf course its essence. He designed Richmond with “turtleback” greens like those at Augusta National and Pinehurst, even though the course itself was flat. During the “extravagant 1980s,” a master plan was commissioned, and changes were made.

Reeling in bunkers
Macan originally designed the golf course with few maintenance staff in mind. Mingay has worked to halve the total area of bunker space, allowing for 50 per cent of the time and expense previously allocated to raking – “that didn’t really have any purpose” – dedicated toward fairway expansion, restoring strategy to the game and giving higher handicap golfers more latitude.

Cutten, whose firm’s current work includes a renovation of the Brantford (Ont.) Golf & Country Club and other projects in British Columbia and Oregon, said when working with a master plan or a new build project, the architect must look at the landscape holistically and determine what core issues might exist and how they can be resolved, realizing that a site might have a uniqueness, nuance or quirkiness “because some of those things are what makes great golf.”

Architects are attracted to certain golf courses because they’re special and have elements that make them unique and stand out from others.

“Our role as architects is to understand when we’re presented with a new client, is to really dive into the nuances of the day-to-day operations of a club or course and understand what makes things tick,” he said.

The architect, Cutten said, must understand what tasks the maintenance staff are doing most of the time. These could include mowing, maintaining bunkers, repairing cart paths or fixing irrigation leaks. The challenge for the architect is to address the things that occupy most of a worker’s time and resolve them while wisely investing the club’s money. Achieving this must also factor in making the golf course better, ensuring the game is fun to play, providing accessibility to players of different skill levels, and making the course stand out among the crowd.

“That’s what we as architects can bring to the mix,” Cutten said.

The historic Brantford Golf & Country Club was originally designed by Nicol and Stanley Thompson and renovated in the 1960s by Robbie Robinson. Cutten said when he became involved in the current renovation project, he found that its bunkers were tailored to several different styles which created visual inconsistency.

“It was our goal to define something from their history – a certain look we could put into the club,” he said, adding something historic was desired with the objective of minimizing the inputs of the maintenance staff.

The solution was to shape the bunkers according to Nicol Thompson’s original vision in a style that would minimize washouts and reduce the number of maintenance staff headaches. Other considerations included providing easier bunker access for members, installing liners to minimize sand contamination and improve drainage.

Cutten said it’s important to look at things bunker by bunker, asking why some are necessary or if they should be located elsewhere.

Reconsider fescue, path curbing
Andrew suggested it’s perhaps time to give up on fescue on golf courses, “unless you’re a really high-end club and you can put in the amount of work that it takes to produce a fescue that is playable.”

He said there are other things that can be eliminated on golf courses to reduce time and labour such as curbing cart paths. Although curbs are meant to keep golf cars from straying from paths and damaging turf, they require edging which can be labour-intensive. Cart paths tend to point toward play and require annual resodding of their exit points, he added.

Outdoor furniture such as benches gives golfers a chance to sit, but they must be moved to allow for mowing or trimmed around the legs.

These are things that tend to get in the way, Andrew argued, and they create needless tasks.

“We need to do away with some of the things we do on a yearly basis,” Andrew said.

Mingay’s sentiments about cart paths were similar to Andrew’s, adding he’d rather not see them at all. He noted a northwestern golf course that is open year-round has “wall-to-wall” cart paths to deal with the area’s extremely wet weather but suggested the course would be better off to invest that money on drainage.

Bunkers and trees often define the inside corners of dogleg holes, but there are other options to accomplish the same purpose, the architects agreed.

Bunkers are always secondary features on dogleg corners, Cutten said. Working with the landscape and shaping features of interest should come first, he added.

“It’s oftentimes more interesting than putting a bunker somewhere,” he said. “A bunker for your average player is a big deal. For a good player, it’s like it’s not even there.”

Bunkers today tend to be designed so that a ball entering the hazard rolls down into the middle, allowing golfers to hit their shots without great difficulty. Instead of a bunker, adding contour to a dogleg’s design gives the hole an interesting slope and changes the way a golfer hits the ball. The ball could lie above or below a golfer’s feet.

“Contour is one of those things that has stood the test of time, and I think always will,” Cutten said.

Andrew said if mounds are adopted in favour of bunkers, they eliminate a course’s “disaster” maintenance. A significant rain event won’t be a big issue because it’s just grass, and nothing will be washed out.

A golf course that doesn’t have “stuff” won’t be an interesting course and will have few clients, he said.

Mingay said mounds shaped in a dune-like fashion, with side slopes and dents, bear a “cool” look.

“Sometimes, the coolest-looking mounds mean you simply can’t just ride a rough mower over them,” he said. “You might have to send a guy over there with a weed whacker or a smaller push mower to maintain a cool-looking feature like that.”

Cutten acknowledged that bunkers can present a major labour issue in the aftermath of a washout caused by a heavy rain event. Working with the superintendent at the outset of a design or renovation project is important to achieve a common understanding of the maintenance ramifications a particular design might have.

“The earlier in the process I know that something I’m doing could be an obstacle, the earlier that we can talk through it and quickly resolve it is key,” he said. “At the end of the day when I leave, it’s the job of the superintendent to maintain what I’m doing and, if it’s not working, it’s going to change. I want to know that what I’m leaving behind is going to be successful and it’s only going to improve.”

The absence of bunkers not only frees up maintenance, but it also speeds up the game, Cutten added. 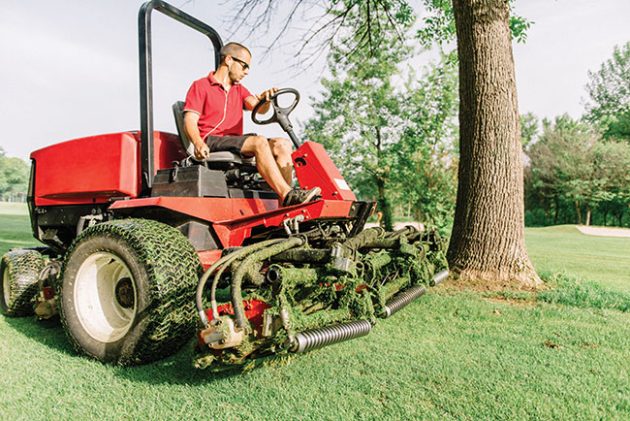 Not only can trees cast shade for extended periods of time on golf greens, they are obstacles that maintenance staff must work around when mowing. Architect Ian Andrew suggests trees growing in key areas of a golf course should be removed. Photo credit: Microgen/Adobe Stock

British and Australian thoughts
Most golf course maintenance in Great Britain and Australia is focused on greens and tees, where most shots are made, Cutten said.

“Everything else is maintained to a certain level,” he noted. “It changes throughout the year.”

In Scotland, the ball rolls further and golfers have more fun when fairways burn out during the summer.

“Golf is played in nature, and nature changes season to season,” Cutten said. “We’re sort of homogenizing one season to another, trying to have them all play the same versus accepting that this is a game played outside, and we should relish the changes that occur.”

Australian superintendents don’t understand North American maintenance practices because they maintain areas of a golf course where the ball “is supposed to go,” and don’t bother with areas not meant to be in play, Andrew said.

“It seems we have an overemphasis on maintaining where you’re not supposed to go,” he said. “That was their criticism of us.”

Great golf architecture is all about angles, Mingay said, suggesting an ideal green design can set up angles that prevent “overbunkering” tee shots. Instead of decorating holes with bunkers, the challenge is to make a hole interesting without overdecoration.

Andrew said it’s the slopes, tight mowing and highly contoured greens that make Augusta National so challenging, and not its hazards.

“If you’ve got a really interesting green surface that’s very complicated and tilted to a particular side, you actually don’t need fairway bunkering,” he said. “The strategy and difficulty are set by the green itself. You don’t need smaller greens and you don’t need smaller fairways. You need less intrusions.”

The architects were asked how they would design a golf course with less maintenance in mind.

Mingay said he would make the course “interesting for the best and enjoyable for the rest” without decorating to the point where logic and practicality are abandoned.

Cutten said he would stick to the basics by routing greens and adding contours and drainage.

“It’s the nuts and bolts of what makes a great golf course good,” he said.

Andrew said he would cut down every tree possible.

“That would remove much of the maintenance and would actually be the most efficient way of reducing inputs and not having crap to mow around anymore. The more trees you get rid of, the more efficient you are, and the less labour you need,” he said.

Related
Beaconsfield Golf Club appoints architects to consult on club’s future endeavours
Superintendents influencing golf course design
Golf courses should be unique
St. George’s new greens will be speedier than they were in 2010 this week at Open