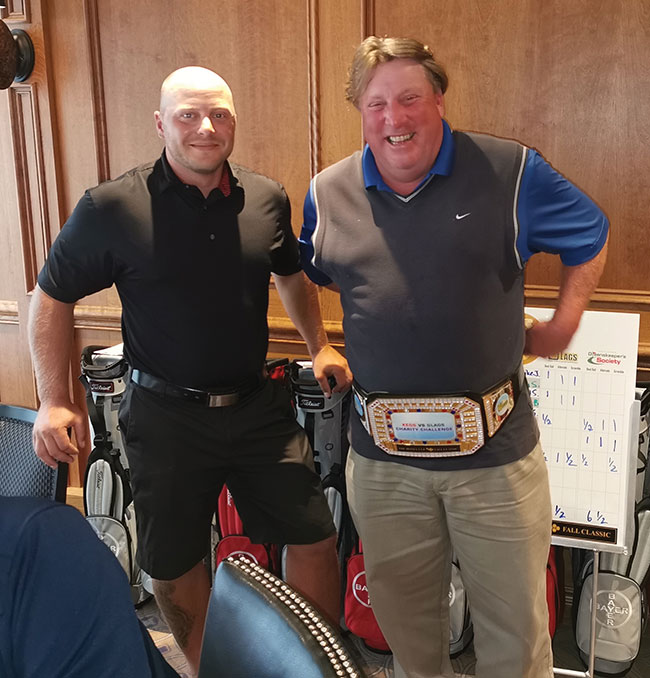 Jamie Spencer, captain of the GLAGS team, proudly wears the Honey Cup Fall Classic championship belt for another year following his team’s victory over KEGS in September. Congratulating him is Gregg Menard, captain of the KEGS team. All Photos credit: Mike Jiggens

The annual match play event, sponsored by Bayer Environmental Science, saw GLAGS upend KEGS by an 8½ to 6½ score. GLAGS’ victory gave it an 8-5 series lead over KEGS. The friendly competition was previously sponsored by Syngenta from its inception in 2009 through 2019.

It was renamed last year to honour the memory of the late Paul Brown, who died in 2017 in an on-course accident at the Sarnia Golf & Curling Club, where he had been the club’s longtime superintendent. Brown had a passion for beekeeping and honey production that began several years ago when he was superintendent at the Maple Downs Golf & Country Club in Vaughan. He renewed his hobby upon his arrival in Sarnia.

Greig Barker, superintendent at Highland Country Club, said Brown “would have loved to have been here for an event like this.”

Brown’s son, Greg, will be the host superintendent for the 2022 matches at Maple City Country Club in Chatham.

“I talked with my GM about it and he said, absolutely, we’ll do it next year, so we’re already putting some things in place to know what to expect,” he said. 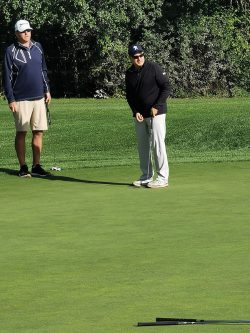 Ryan Beauchamp of Bayer watches his putt on the 18th hole while partner Greig Barker, superintendent at Highland Country Club, looks on.

Bayer’s Ryan Beauchamp quipped the Honey Cup Fall Classic is a more organized event than the PGA Tour’s Canadian Open, saying the venue for the following year’s event is already established, even as the current competition is being played.

“Hopefully we continue this (event) for a lot of years because it’s just a small, intimate group where we can do things a little bit different,” he told the collective group of 20 participants. “Bayer believes in the grassroots of supporting you guys.”

Beauchamp founded the match play event 12 years ago when he worked for Syngenta as a turfgrass specialist.

Following the matches, members of both teams sat down for a round table discussion of agronomic matters and on-course troubleshooting, and shared a number of humorous anecdotes.

Barker, acting as host superintendent, noted the club is celebrating its 100th anniversary in 2022. During the more than 10 years since he’s been at Highland, he has overseen a number of important infrastructure projects, including improved drainage, irrigation and bunker work.

“Intimate get-togethers like this are more our thing because we can have a big event with 150 people who don’t know half the people who are there, and you don’t expand your network,” he said. “I think with this tight group, we all get a chance to talk to each other. That’s what Highland is about. Our club is not a top tier, snobby club. This club is relaxed.”

Highland had previously been the host course in the competition’s third year.

Jamie Spencer, former superintendent at London’s Westminster Trails Golf Course, has moved on to the city’s Echo Valley Golf Club, equating the transaction to a “homecoming.” Having first picked up the game there and beginning his foray into the industry at Echo Valley, he said he has come full circle and is back working alongside superintendent Scott Gardner, with whom he’s known since childhood. 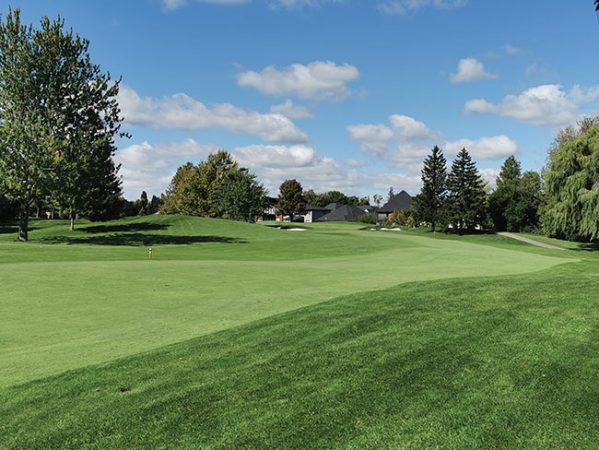 Beauchamp singled out Jim Gammage, superintendent at the Ridgetown Golf & Curling Club, for his long-standing employment with the club, suggesting that anyone who has served in a management position for more than 25 years with the same club deserves to be made an honourary member for life.

“Bentgrass gets attacked by nematodes like no other,” Beauchamp said.

Match results
The format of the match play competition had 10 members of each association, divided into five pairs, going head to head against their counterparts in three separate six-hole segments: best ball, alternate shots and a scramble, with one point awarded for a win in each segment.