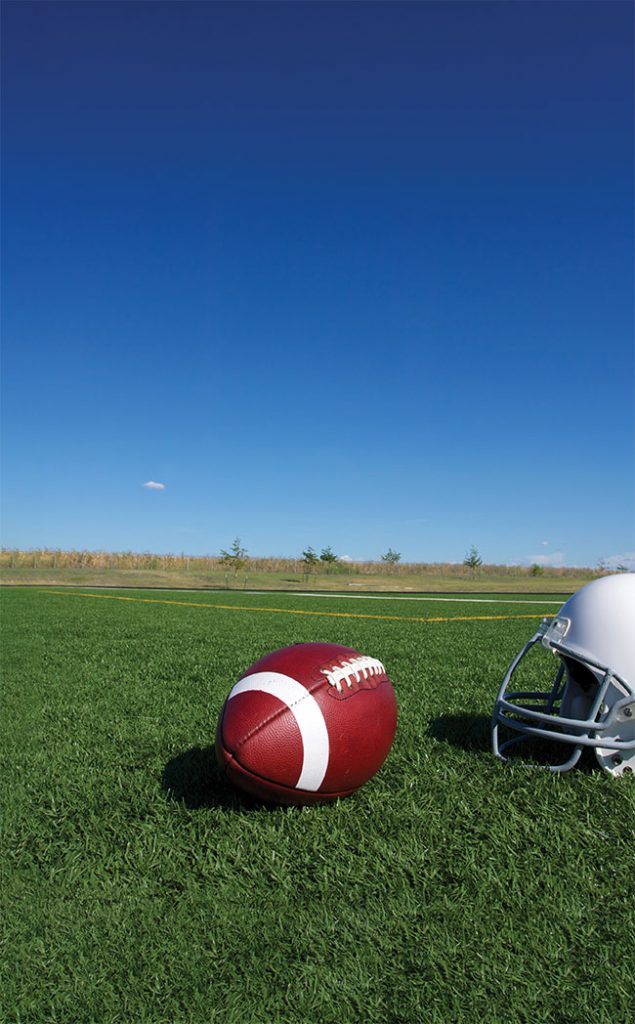 Minor football players in Woodstock, Ont. are looking forward to playing on their brand new playing field once COVID-19 restrictions are relaxed. Up until now, the city’s minor football program didn’t have a field of its own, and it experienced difficulties in recent years to get field time from area high schools.

The football organization asked the city for a field it could call home, but the municipality’s inventory of land availability was limited. The only practical solution was to take an existing soccer field and convert it, in full, to accommodate football – a project that got underway in 2019.

Since nine soccer fields existed within Woodstock’s Cowan Park complex, it was felt a Category 3 field could be converted into a Category 1 multi-purpose field tailored for football. The $1.2-million cost estimate, however, seemed a little steep for the tax base of a city of 41,000 people.

Speaking in the winter at the virtually delivered Ontario Turfgrass Symposium, Chris Kern, supervisor of parks and forestry for the City of Woodstock, said costs could be cut significantly if the lion’s share of the work was done in-house.

When all costs were factored in, the price tag for the construction project came in at $578,000 – “a far cry” from the original estimate if the work been awarded to a general contractor.

Additionally, the city obtained a grant to pay for a GIS co-op student from London’s Fanshawe College.

“Our plan was to plow under everything on site within the field itself and perimeter sidelines,” City of Woodstock sports turf manager Trevor Warner said.

The site was about three feet too high at one end of the field, resulting in 30 to 34 inches being dropped from the north end through the centre of the field. Warner described the site as more of an open green space than a soccer field.

“We used our own City of Woodstock trucks and used a rental John Deere 544 loader on site,” he said. “We moved excess subsoil off the site into the parking lot and utilized all 1,100 yards of excess subsoil into the next soccer field.”

Soil screening
Screening of the soil was done by Whitehead Soils Ltd. of Norwich, Ont. Work began at the field’s south end and continued northward. Several large rocks were removed and screened from the native soil during the excavation process, which helped prevent potential damage to equipment and alleviate the chances of player injuries.

“This is why we screen,” Warner said. “It’s a better growing medium for the grass and a truer surface for the players with consistency.”

The city used its own lasers for grading accuracy to establish a one per cent slope, and city employees installed the field’s irrigation system themselves. The system was set with 2.5-inch lines running down the field’s sidelines, two feet away from the playing surface. Eight Rain Bird Eagle 950 rotor heads – four on each side of the field – were installed along the length of the field while four Eagle 700s – two at each end – delivered water “up the gut.” Warner said the system allows for the other heads to function normally if one develops a problem. The heads throw out about 60 gallons of water a minute with upwards of 95 feet of reach.

“It throws a ton of water in a short period of time, but it’s a beautiful rainfall coming down – just heavy droplets.”

The original plan didn’t include the addition of an irrigation system, but money was obtained up front to include it in the project.

Because the field was a grow-in project, the availability of water ensured there was no death after seeding during a period that was often hot and dry. Warner said it’s hoped the city can get away with irrigating deeply and slowly once a week from this point onward.

Electrical conduit was buried 3.5 feet below ground to power the field’s LED light fixtures. Under the supervision of a local electrical contractor, the work was done early on in the project to avoid having to tear up parts of the field later on. Additional conduit was installed to accommodate an electric scoreboard if future plans call for one.

Concrete was poured to provide a walkway into the field enclosure and to provide the base for a bleacher pad measuring 130 feet by 14 feet. A 14-foot gap separates two sets of bleachers, with an allowance of five feet in front to provide accessibility. Concrete was also used to help anchor both sets of “gooseneck” goalposts.

Warner said he felt confident the field could be seeded by the fall of 2019, but the installation of the irrigation system and electrical conduit – both of which weren’t included as part of the original field construction plans – added to the timeline. Waiting until the spring of 2020 to seed also allowed time to address issues associated with field settling.

Warner said Barenbrug’s Rhizomatous Tall Fescue (RTF) became the preferred seed choice after he saw it growing in a plot at a U.S. trade show and was impressed with its attributes. He said he was never previously a fan of tall fescue, but added he didn’t like the tendency of Kentucky bluegrass to experience rust in late August and September when the Woodstock area was often targeted with storms and increased moisture levels. Municipalities must abide by the Ontario cosmetic pesticide ban – enacted in 2009 – and have limited control measures for rust.

“Being that this is a football field and we’re into the fall, I want this green grass a healthy grass. Healthy grass is safe grass. I wanted to go against the grain a bit and try out this RTF.”

The RTF, coated with Yellowjacket technology, was seeded at a rate of seven pounds per 1,000 square feet over three passes. On Aug. 22, 2020, the same seed was applied at the same rate. A three-way mix of perennial ryegrass cultivars was put down on the sidelines. Warner said a nice colour contrast was realized between the field itself and its perimeter.

“As it tight-knit grows, it is a beautiful dark green colour,” he said of the RTF, acknowledging it requires less water than bluegrass. “If this type of grass allows a lot less water to be needed and can stay healthy and green, then, by all means, let’s try it.”

After the field was initially seeded, the area was hit by a torrential downpour, moving much of the seed.

The good news, however, was that the field’s drainage system worked admirably.