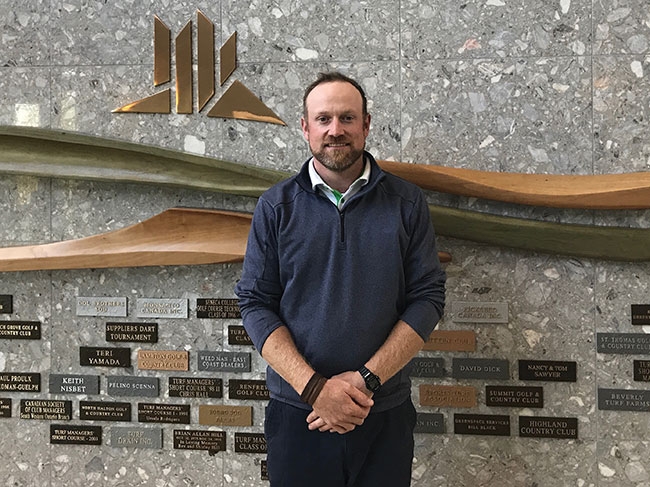 The new Guelph Turfgrass Institute has completed the first phase of its transition to its new location at the Arboretum on the University of Guelph grounds. The move from the GTI’s original site off Victoria Road began in 2017 and will continue this year with the construction of a new two-storey G.M. Frost building that will facilitate educational instruction, office space and a boardroom.

Cam Shaw, communications and outreach co-ordinator for the GTI, updated golf superintendents on the institute’s progress in December at the 30th annual Ontario Seed/Nutrite professional turfgrass seminar in Waterloo.

Although much of the infrastructure had been installed at the new site by the end of 2017, 2018 became a significant year for the project with the completion of its first phase that included the establishment of 5½ acres of research plots and the installation of a new pump and pump house in late April and early May.

“That helped spur on the ability to charge the irrigation system that was installed (by Vanden Bussche Irrigation) in 2017, flush it out and make sure all the heads were locked and loaded and ready to go and firing on all cylinders,” Shaw said.

“The execution of the grow-in was excellent,” he said.

Plugs were pulled from Cutten Fields’ greens and delivered to the GTI’s pushup plots located at the far west end of the property.

The first research trial got underway this past year under the supervision of Dr. Eric Lyons of the University of Guelph. About 28 different cultivars of Kentucky bluegrass are being monitored for their drought resistance capabilities in a Turfgrass Water Conservation Alliance trial.

An NTEP (National Turfgrass Evaluation Program) trial was originally slated to begin in 2018, but seed originating from the United States was held up at the border, causing the seeding window to be missed. The NTEP trial for turf-type tall fescue is now planned for this year and will be the first NTEP trial to be conducted at the GTI in several years.

Shaw said the west plots are mainly golf-centric type root zones and will be where most golf research will take place. The east plots are all sports field root zones.

He said once the pump was installed, it gave momentum toward getting the research plots going.

“It was the lifeblood in order to make sure the grow-in could be executed.”

The pushup greens incorporating the plugs from Cutten Fields are mostly poa annua.

The sports turf plots are classed as Category 5, similar to the native material found in golf fairways.

By the first couple of weeks in September, all surrounds were hydroseeded with 50 per cent perennial ryegrass and 50 per cent creeping red fescue mix.

The east plots feature a runoff feature to one side.

“We’re hoping it will create an opportunity to do some research looking into the surface runoff of fertilizers and pesticides.”

Construction of the Frost building – which will be larger than the original structure – and renovations to a couple of the Arboretum structures were estimated to take 14 months to complete, allowing for move-in to take place in the spring or summer of 2020, provided there are no unexpected delays.

Shaw said the GTI relocation project would not have been possible without the support of a number of industry groups and individuals that supplemented the financial contribution of the Ontario government. The project was estimated to cost $15 million of which 80 per cent was provincially funded, including the cost of renovations to the Arboretum Centre.

“It’s a very substantial amount,” Shaw said of the government funding, quipping that perhaps the province felt guilty about the GTI having to move as well as not renewing the position of turfgrass extension specialist following Pam Charbonneau’s retirement a few years ago.