HISTORY has been made within the Canadian Golf Superintendents
Association. For the first time in its 45-year history, the
organization has elected a woman as its president. 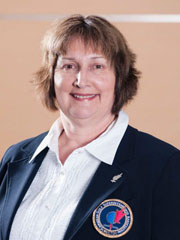 “It’s somewhat overwhelming,” she said of her history-making rise to the top of the CGSA’s board of directors. Adding she was “thrilled and humbled” to hold such a position, it was never her plan to even hold an executive position on the board of the CGSA or any other regional or provincial organization.

A veteran of the industry, Amirault recently left Edmonton’s Royal Mayfair Golf and Country Club after 30 years to grow in the new Les Furber-designed Quarry course. Her career in the golf industry began as a waitress inside Royal Mayfair’s clubhouse before she joined the course maintenance team under the mentorship of former superintendent Sid Puddicombe.

Amirault said it was a bit of an adjustment to leave one golf course for another after 30 years, but said she embraced the challenge of starting new.

“This kind of afforded me to look at life a little bit differently and what I wanted to do in the future,” she said. “Even though it has been a change, it’s made me look at different things I want to do in the golf business.”

Amirault has a previous renovation project of significance under her belt, having redone the greens and tees and installing a new irrigation system at Royal Mayfair about 20 years ago.

The Quarry is a 27-hole links-style design with several naturalized areas throughout the property. As of late April, 22 of the holes had already been grown in following seeding last fall.

Amirault said she is fortunate to have a course manager present at The Quarry to look after much of the important work left to be done as she tends to some of the key CGSA business that awaits her during her one-year term of office. Over the next several months, her presence will be required at such events as the Score awards, the Canadian Open, the 100th anniversary celebrations of the PGA, the BIGGA conference in the United Kingdom and the CGSA’s fall field day in Prince Edward Island.

As for her goals with the association this year, she said the golf industry continues to have challenges with the economy, environmental issues, and pesticide restrictions which need to be addressed.

“Some of my goals this year are to continue our strategic plan for the association. We will continue to be a leader in providing professional development programs.

“We are also working with other organizations and having National Lobby Days across the country. The objective is to establish  that Canadian golf is a credible and substantial industry.”

It is the CGSA’s objective to build relationships with key political and legislative contacts and to support the lobby efforts of individual advocacy issues, she said.

The CGSA will also continue to redefine the Canadian Turfgrass Research Foundation as the communication hub for turfgrass research, she added.

“We also will continue to communicate the benefits of being a CGSA member. Some of the programs we provide are CGSA reward programs, education opportunities, and CGSA accreditation programs.”

Amirault recently took part in Alberta Golf Awareness Days which brought together golf course owners, managers and other key personnel with elected members of the provincial legislature “so that they can understand the issues we have.”

She said many don’t realize just how important golf is to the economy, adding, in Alberta alone, the game contributes $1.7 billion and employs about 50,000 people.

The CGSA regularly meets with both the the GCSAA and BIGGA to discuss issues of common concern, much of which are related to environmental matters.

“We are really environmentalists because we want to protect wildlife and conservation and water quality, and we do a lot of education programs.”

Golf Canada had previously administered the Canadian Turfgrass Research Foundation, but its administration has since been passed on to the CGSA. Amirault said it is the association’s goal to expand the CTRF so that it not only involves ongoing research, but will also deal with environmental issues and raise awareness among golfers as to the importance of turfgrass research as it relates to environmentalism.

Amirault said golf is one of the few industries in which superintendents are always willing to share ideas and information with one another, even though golf courses themselves are often competing for business.

“That’s the one thing I really like about the business is that, no matter what you have, every superintendent has the same issues. It’s one of the very few businesses where people will share their ideas. If you phone a superintendent anywhere, they’ll always return your call.”

Since her introduction to the golf business three decades ago, Amirault said she has become a student of the game’s rich history.

“I love the history of golf and the architecture,” she said. “It’s a fascinating business.”

One of her career highlights was a private tour she was given a number of years ago at Augusta National Golf Club, home of The Masters.

Amirault said she hopes to visit the Old Course at St. Andrews in January while she is in the United Kingdom to attend the BIGGA conference.