No more than a couple of decades ago, it was rare for a golf course to
hire a female superintendent. At that time, the number of female
superintendents could probably be counted on one hand in all of Canada.
Few women, in fact, were even pursuing careers in the turf maintenance
end of the golf industry.

Times, however, are changing, and more women are entering the profession. Overall, they still represent a small minority, but a number of women have successfully climbed the ladder and are holding down superintendent’s positions in all pockets of Canada—in the west, in the Maritimes, and, in St. Marys, Ont., there are two female superintendents. 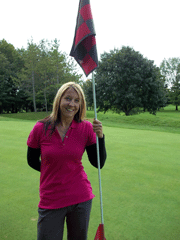 Most of these women became superintendents by travelling the same general road: perhaps some initial summer work on a golf course while in high school to whet their appetites, turfgrass management or horticulture training at the post-secondary level, and then tenure as an assistant superintendent to garner the necessary experience.
At least one in that small, exclusive sisterhood of Canadian female superintendents chose a somewhat different route to reach the top.

Ashley Pierce (no relation to Nancy Pierce, superintendent at The Links at Crowbush Cove in Prince Edward Island) is completing her first full year as a superintendent at the Dundee Country Club in New Dundee, Ont. She got her first taste of the industry as a 15-year-old, working at Kitchener’s Westmount Golf &â€ˆCountry Club.

But it wasn’t the grounds crew she eyed at the time. She was more interested in securing a summer job at Westmount as a server or busing tables in the clubhouse. After witnessing one employee emptying garbage, she immediately became turned off by the job and pondered work elsewhere.

A short while after realizing a job with the club’s food services department wasn’t for her, she learned of an available position on Westmount’s grounds crew and was hired by the late Hugh Kirkpatrick, one of the profession’s more respected superintendents who was well-known throughout Canada.

“He was a great guy,” Pierce said, acknowledging that she was unaware at the time of his reputation within the industry. “He treated everyone like family. We were all like his children.”

She said Kirkpatrick was “inspirational,” and having his name appear on her resume has been a plus.
Her mentor passed away during her second season at Westmount, and Cory Janzen took over the reigns as superintendent.

Toward the end of her five-season stint at Westmount, Pierce was moved to the afternoon shift, cutting fairways, “which was fine, but I was at the point where Iâ€ˆjust wanted something new. I’m not a sit-still kind of person. I always like to be doing things, so I just figured I wasn’t getting enough out of it.”

Not entirely leaving the golf industry, the then 19-year-old Pierce found employment with Kitchener-based JDâ€ˆLandworks, a construction company which built and renovated golf courses as well as residential and non-golf projects.

“They had never hired any females before so they were taking a pretty big chance with me, but they hired me and I loved it. We went all over the place doing course construction and renovation. I thought it was a good opportunity to learn new things about the industry.”

For three years after leaving Westmount, she travelled throughout Ontario with JD Landworks. Among the projects for which she lent a hand included a new nine-hole pitch-and-putt course affiliated with Goderich’s Sunset Golf Club, a new irrigation system at the Galt Country Club, a new tee system at the St. Thomas Golf & Country Club, a driving range in Mississauga, and work at the Ladies’ Golf Club of Toronto and Copper Creek Golf Club in Kleinburg.

As a labourer with JD Landworks, Pierce said her role often included lots of digging and hydromulching, but she said she developed an appreciation for that type of work and learned a lot about what goes into a golf course before it is ready for play.

“It’s really neat to see something happen from the ground up, from the clearing of the land to the seeding of the holes and fertilizing it afterwards. I’m thankful for all the stuff I learned while on the construction crew. I learned a lot about what’s underneath the ground and how to fix it, and I never would have known that if it wasn’t for building golf courses. Cutting grass is one thing, but to actually learn the ins and outs of it was a once-in-a-lifetime opportunity.”

JDâ€ˆLandworks was sub-contracted to look after the maintenance work at The Oaks of St. George Golf Club while she was employed with the company, which reacquainted her with that aspect of the industry. The Oaks didn’t have an assistant superintendent at the time, but decided one would be necessary.

Pierce said she figured it was time to “put some roots down” after three years of working across Ontario, and applied for the position.

Having already done some construction and maintenance work at The Oaks, “it just seemed natural and a good opportunity for me to move into that position.”

The semi-private golf course had been “run down” before JD Landworks was hired to maintain it.

“In the time we were there, we brought it back up to normal conditions.”

Pierce applied for the new assistant’s position and was awarded the job based on her experience and involvement at the golf course, but it was agreed upon by all parties that she would have to obtain a formal diploma in the turf managers’ short course through the University of Guelph within her first two years.

Anticipating an eventual move up the ladder before she even applied for the position, Pierce obtained her pesticide applicator’s licence “because I knew that was going to be a big feature.”

Pierce became the IPMâ€ˆagent at The Oaks—the same position she holds at Dundee—and said she will be forever grateful for the mentorship The Oaks superintendent Richard Voigt provided.

In her first year at The Oaks, she worked year-round and then took the short course during her second year. In total, Pierce worked five years at the golf course as assistant superintendent, but felt things were becoming a little “unpredictable” during her time there. Some years she worked the entire year and others she didn’t, and she didn’t have a contract.

“I decided to take the opportunity to see what was out there,” she said, learning in the fall of 2011 that Golf North was looking to fill two superintendent’s positions in time for the 2012 seasons. Unaware of which of Golf North’s courses was looking for a new superintendent, she applied in October and was called for her first interview in December.

“I didn’t think I had a chance in hell. I thought if I get a second interview, awesome.”

Pierce hadn’t severed her ties at The Oaks in case the interview process failed. A second interview in January, however, proved fruitful, and she learned the position was at the Dundee Country Club. Having resided in Kitchener for several years, the daily commute to The Oaks was about 45 minutes, but that would be cut by more than half to the nearby community of New Dundee.

She realized her first job as a superintendent was going to keep her busy from the outset. Dundee’s greens had become substandard, its maintenance equipment was in dire need of servicing, and bunkers required a major facelift.

The equipment issues in particular led to her being overbudget this year, but she said the club was understanding of her predicament.

“But we’re looking at the big picture here, and it’s going to take a little bit. You’ve got to give a little to get a lot. As long as you can prove you have a reasonable explanation for why you’re doing something, they’re very good with me as far as the budget goes.”

Pierce said she had some “proving” to do in her inaugural year, but she’s won over the members with a number of course improvements made already. She said 2012 was designated from the beginning as “the year of the greens.” The older putting surfaces are a pushup style which are about 50 per cent poa annua with a mix of bentgrass and other grasses accounting for the remainder. The quality of the greens had been suffering, but the added attention provided to them turned them around.

They are “night and day” from what they used to be and putt true, she said. Bunkers have also undergone significant improvements this year. Previously, they had no edges around them and contained varying amounts of sand. Golfers were able to putt from them in many instances, but they have since been re-edged, reshaped and resanded.

Next season’s focus will be on fairways, Pierce said. Dundee’s fairways have been spotty for the most part and are irrigated manually through quick couplers. Because much of the irrigation process is done by guesswork, some are typically overwatered while others get underwatered.

Night watering is part of the ritual at Dundee, and Pierce found herself one evening in a scary situation. Late one night, she was in the pumphouse with the radio turned up loud and barely was able to hear shouts from outside, demanding that she step out with her hands up. Police had been summoned to the golf course by a neighbour who was suspicious of an ATV driving around the golf course after dark with its headlights turned on, but Pierce was simply going about her night watering rounds.

Other plans for next season are to strip and level the existing tee decks and make them more playable.

One of Pierce’s objectives for the winter off-season is to remove about 40 trees, including several poplars, from the property which have been deemed unhealthy.

“There are areas that will benefit from the trees being taken out.”

Pierce heads a staff of 10 in the turfgrass maintenance department, including her assistant Ryan Surette. She said they greatly complement one another.
“My staff is hard working. I couldn’t ask for a better crew.”

She said she finds the best hires in the golf course maintenance industry—male or female—are those who are “outdoorsy.” She said she has found people whose employment backgrounds are in office or mall settings tend not to work out.

In spite of being a minority member of a predominantly male-led industry, Pierce said she feels she is getting the respect from her male peers and colleagues she feels she deserves.

“You’ve got to be tough and hold your own with the big boys. I’ve worked hard to get where I am.”

She said she’s willing to ask questions of her peers in the industry when necessary, knowing that they are all men.

“I have a good network of men who take care of me. Maybe being a female has its advantages.” –