Measuring the pros and cons of electric-powered landscaping equipment 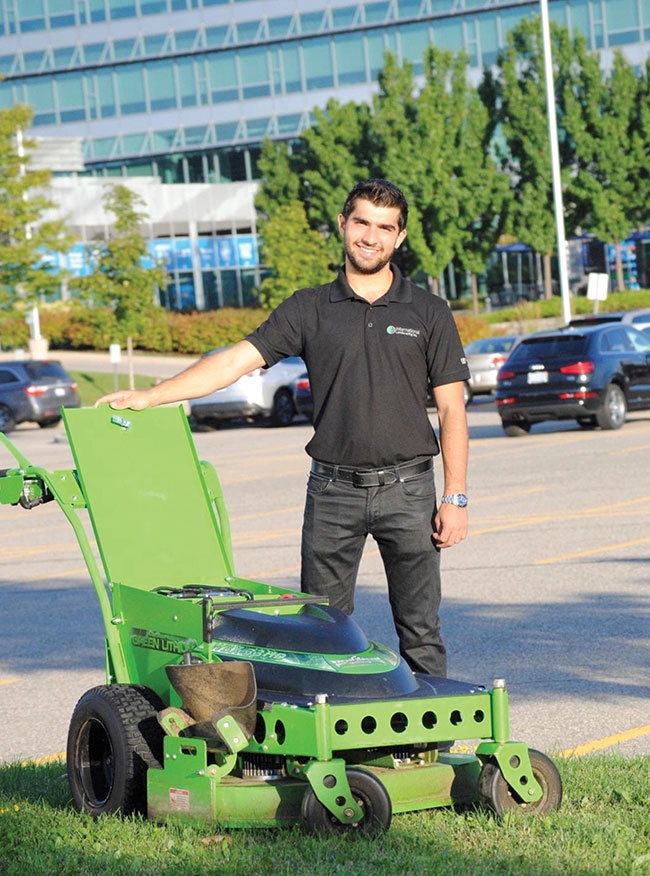 Michael Gucciardi is the sales manager and environmental sustainability manager for International Landscaping in Milton, Ont.

An Ontario landscaping firm has taken an eco-friendly approach toward its maintenance practices over the past three years, utilizing electric-powered equipment for half of its operations in order to reduce harmful emissions, generate less noise and promote better health among its employees and customers.

In 2016, International Landscaping initiated its first electric launch to service its corporate clientele. A year later, a second electric fleet was launched. Today, the 30-year-old company is believed to be the largest zero emissions landscape maintenance contractor in Canada.

Gucciardi, son of company CEO and co-founder Baldo Gucciardi and nephew of president and co-founder Santo Gucciardi, said he was essentially groomed for the industry since birth, adding his environmental studies at the University of Waterloo directed him towards his passion for achieving sustainability. Gravitating in the direction of electric-powered equipment was an important step toward realizing that goal.

“We identified an opportunity,” he said, acknowledging there were several factors considered before switching out conventional gasoline-powered equipment for electric-powered tools. “Most landscape equipment that was electrically-powered 20 years ago was not commercial grade. You had an extension cord attached or batteries that would last about 30 minutes.”

Yesteryear’s limited battery life might have been OK for residential purposes, but it wasn’t suitable for commercial applications, Gucciardi said. In recent years, however, lithium-ion batteries have emerged with longer lifespans that deliver significantly more power. Now that they have become commercial grade, professionals are starting to tune into their attributes.

“We all want to be as sustainably minded as possible, but at the end of the day we’re a business. It’s important that if you want to adapt to this technology, you’re aware of the financial costs that are associated with it and that it’s feasible for your business.”

Although they are still somewhat costlier than their gas-powered counterparts, electric-powered tools and their batteries have become more affordable.

“This has allowed us to provide the service on a commercial level,” Gucciardi said.

International Landscaping prides itself on a high-level, high quality of service, he said, adding that before moving toward electric-powered equipment it was necessary to know how the equipment differed from gas-powered equipment in terms of efficiency.

“Does it get clogged? Will it totally burn out if it gets a little bit wet? There were a lot of unknowns that we really weren’t aware about, but we were willing to take the risk, and that’s what moved us into creating a road map.”

Gucciardi said landscape contractors don’t necessarily need to have exclusively electric-powered tools among their inventory of equipment in order to move toward sustainability. A contractor can perhaps start with an electric-powered backpack blower if he does residential maintenance work. Because backpack blowers are typically targets of negative feedback due to the excessive noise they produce and the pollution they emit, starting with an electric-powered version and building from there will demonstrate the contractor has the environment in mind. He can then map out what he’s trying to achieve so that he can stay on track with his goals. A move toward eco-friendliness can also be used as an effective marketing tool, he added.

Michael Gucciardi is the sales manager and environmental sustainability manager for International Landscaping in Milton, Ont.

The need for the right battery
Batteries are the key components behind electric-powered equipment and represent the most significant challenge if professionals are contemplating switching from gasoline to electric. Batteries are essentially replacing a gasoline source, making it imperative that the right battery types are used, Gucciardi said.

Gucciardi said power outages tend to be a common occurrence in Milton.

“If they (his work crews) were to arrive in the morning and there was a power outage and they had no available tools to do the services we do, that poses a significant problem, both for them and our reputation,” he said, noting 50 per cent of his company is using electric-powered equipment. “If this happens multiple times in a week or a month, it becomes really difficult to properly balance that and ensure you’re following your contractual obligation. If you don’t have the tools and you made a promise to use electrical, you need to go to plan B.”

A contractor who is considering adapting to electric-powered equipment needs to know the significance behind having a power monitoring system because it will be detrimental to his operation if he doesn’t have a supply of fully charged batteries.

There are several types of chargers that can go with a single battery, Gucciardi said. The difference is in charging time. One type of charger may take nine hours to fully charge a battery while another model may take less than an hour.

“A lot of people usually go for the cheaper version, but what ends up happening is you have a lot of variables in the summer that can change how much battery you think you have. It may be 100 per cent to start the day, but might be down to zero by noon.”

Gucciardi said if a quality charger can restore batteries to a 100 per cent charge by the middle of the day, the contractor is in a much better position than if he had no battery source. This can be a challenge when a customer’s lawn is half mowed at the moment the zero-turn mower’s battery has died. With only half the property cut, a plan B is then required.

Other factors that can pose a challenge to battery life include heat, moisture and cold temperatures.

“It’s important that if you’re getting into electrical that you’re aware of these variables because they can influence things like charging time.”

Batteries can be expensive which leads some to be lured to cheaper models. Some battery manufacturers, however, will use a protective coating to block water damage, making the battery more reliable. It adds to the cost of the battery, but enhances its reliability.

“You’re almost better off spending a little bit more money on this particular battery,” Gucciardi said, noting it’s a better option than buying a cheaper battery and getting only a half-season of life out of it. He said his company is still using batteries purchased in 2016 that have yet to lose any of their charge.

When purchasing an electric-powered trimmer, it doesn’t come with additional batteries and sometimes not even a single battery or charger.

“Those are additional costs you have to factor in that eat at your bottom line.”

Because batteries are replacing the fuel source of conventional equipment, contractors will probably want to have more than one battery per tool, Gucciardi said. During a typical workday in which a trimmer, blower and hedge trimmer are used – and crews are going out a number of times – there is no “fill up.” It is therefore important for work crews to be outfitted with a sufficient number of batteries so that they can fulfill their obligation to the customer and get the job done correctly, he added.

“There’s a lot of research and development that still needs to go into it for a lot of deficiencies that are associated with it. That can be expensive.”

“They need to understand the differences between the two to be an effective team player.”

If employees are trained properly in the use of electric-powered equipment, the number of additional man-hours should diminish as operators learn how to maximize the equipment’s use.

Guicciardi said critics of electric-powered equipment believe the technology cannot possibly match gas-powered equipment and that it’s weak and doesn’t work as well, but he added their opinions are based largely on a lack of research.

“An awesome way to counteract that is through training.”

He cited an example of someone perpetually having his hand on the trigger of a trimmer, even while he’s not actively trimming. The operator will run down his battery life much sooner if he’s doing this frequently in a workday. If the employee is taught how to use the tool correctly and properly utilizes its features – such as activating eco-mode during hotter times of the season – he won’t use up the tool’s battery life as quickly.

The environmental and health benefits associated with electric-powered equipment help contribute to an employee’s motivation for using the tools, Gucciardi said.

Dan Schissler, an environmental consultant for International Landscaping, said the use of electric-powered equipment helps to showcase a company as being environmentally responsible. He said the average car driven for a year emits 4.6 metric tons of carbon. A zero-turn, 24-horsepower gas mower running five hours a day, 100 days a year emits about 141 times that amount. Replacing even one mower in a fleet is significant, he said, speculating there will be an economic incentive to use less carbon.

Gas-powered maintenance equipment emit pollutants as volatile organic compounds, he added, noting studies show they negatively affect cardiovascular and respiratory health that can result in poor quality sleep, mood swings and other factors than can affect the quality of life. Switching to electric-powered equipment is likely to improve the productivity of a company’s workforce, he added.

The air quality of the worksite will also improve, Schissler said, and will generally improve the immediate and surrounding environment, benefitting other plants and trees.

Noise reduction with electric-powered equipment provides another health benefit. Exposure to noise levels above 80 decibels over a constant period of time can result in permanent hearing damage, and continual exposure accumulates over time.

“If you’re exposed to this every day for 15 years, it will likely have an impact on your hearing,” Schissler said.

The average gas-powered leaf blower and mower have an average noise output of 100 to 105 decibels. Although most workers wear hearing protection, there is still an effect, Schissler said, citing the average electric-powered mower operates in the 75 to 80 decibel range.

“It’s still not perfect, but it’s a great step forward. That 20-decibel difference is significant. It’s the same difference as a leaf blower and a rock concert.”

He said the environmental and human health benefits of using electric-powered equipment can be used as a sales strategy, suggesting a landscaper is more apt to land commercial clients that want to be environmentally responsible.

Gucciardi said sales based on environmental initiatives is still relatively new in landscaping, and a move toward electric-powered equipment can potentially tap into this market.

“It’s important that you think strategically about your client base when making the transition,” he said. “There’s no point using electrically-powered equipment on a site that has low margins and doesn’t really care about noise emissions. They’re focused solely on price.”

Gucciardi said environmentally responsible landscaping companies have a leg up in targeting potential new customers that are like-minded.

“Don’t be left behind. The climate is changing and so is the market. It’s important that you utilize innovation and these new technologies because as they become more and more of a dominant force within the industry and you have to adapt them, you’re not starting fresh. You have some experience. You have some ideas and know where you stand.”

Even though some companies don’t wish to go fully electric, Gucciardi encouraged the landscapers in his audience to at least try some of the tools to see where the technology is today and its potential for tomorrow.

“If you have a team of people who really dislike electrical and you haven’t trained them or talked to them or helped them, and you’re just forcing them to use it, I promise you you’re not going to have that group for too much longer.”

Gucciardi said it’s important for electric-leaning companies to find individuals who are enthusiastic about working with electric-powered tools. The companies should also have an achievable target.