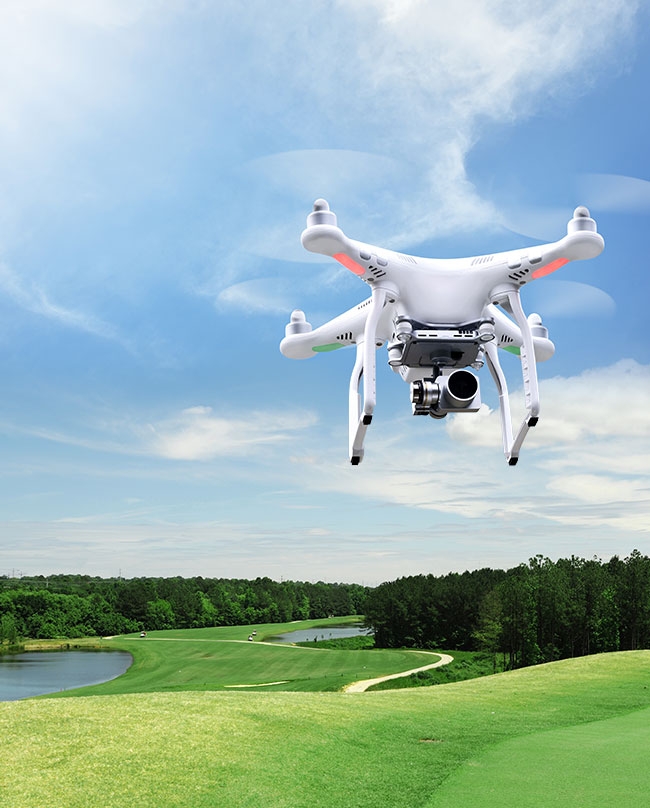 DRONES will know exactly where to return if communication is lost between the machine and the controller.

The tools superintendents use to maintain their golf courses continue to evolve with each passing year, and much of what is available today can help save significant amounts of time, labour, inputs, resources and money. One such technological wonder that has recently left its mark on the industry is the drone, which has several useful applications on a golf course.

Thomas Bastis, superintendent at the California Club in San Francisco, is an advocate of drone use and shared his experiences with the technology during a student-organized spring golf symposium at Guelph, Ont.’s Cutten Fields. First-year turfgrass management students from the University of Guelph organized the event.

Bastis, who has been given the honourary title of superintendent in residence at the University of Guelph, ventured into the world of drones only a few years ago and claims the remote-controlled flying machines are a breakthrough in golf course management. He had also spoken about drone technology in March at the Canadian Golf Course Management Conference in Victoria, B.C.

Camera-equipped drones were originally used on golf courses to record video of each hole from tee to green for television purposes. Televised PGA Tour events had previously presented home viewers with flyover footage shot from a helicopter, but securing a helicopter’s services was expensive and the required footage usually had to be recorded several weeks in advance of a tournament. Today, lightweight high-definition cameras can be affixed to a drone, allowing it to record the same type of footage at a much cheaper cost, and scheduling flyovers has become more convenient because operating drones doesn’t require trained pilots.

Bastis said there is a “storytelling” aspect to drones he called “amazing.” Their flights can be preprogrammed to achieve different shots.

He said he has used six different types of drones at the “Cal Club,” ranging in price from $39 to $3,000. The cheaper model is small enough to fit into the palm of his hand and is ideal for training purposes, he said, adding if it gets smashed up during operator flight training, its owner isn’t out a lot of money.

One of the drone models he has used requires two people to operate. One person using a tablet controls its flight path while another person operates the camera fitted to its underside. The two-person operation is effective, Bastis said, because a single operator might otherwise become distracted trying to manage both functions simultaneously, perhaps flying the unit into a tree or other obstacle.

All drones fly by the global positioning system (GPS) and are intuitive once airborne.

“If a 50-mile-per-hour wind comes in from the side, it will literally tilt itself and lean into the wind and try to keep itself at that GPS co-ordination,” Bastis said.

If the operator lets go of the joystick control, the drone intuitively knows where that individual is supposed to be. The controller connects to a home point using 14 to 20 satellites, enabling the drone to know where both the controller and home base are located.

“If it loses communication, it knows exactly where to come back,” he said, adding drones are able to travel a distance up to seven kilometres beyond the operator’s position.

A drone that loses communication with the operator can be instructed to fly to an altitude of 70 metres – equivalent in height to the tallest tree at the Cal Club – and then return “home.” The operator knows by the golf course’s GPS co-ordinates where he should and shouldn’t be flying a drone.

Drone operation regulations
Stricter government regulations associated with drone operation have been recently enacted with the growing popularity of the flying machines, both for hobby use and for professional purposes. Drone manufacturers are being pressured to incorporate technology into their construction so that when they are turned on they will know if they are in the vicinity of an airport and will then be rendered incapable of flying in such an area. Bastis said he has found himself in situations where his drone would not operate due to its proximity to an airport. Drones are being programmed not to fly in such restricted zones, and the Cal Club is located next door to a major airport.

“Geo fences” are being created to prevent drones from coming into close contact with aircraft.

In spite of a growing number of new regulations regarding drone operations, the flying machines have their place on golf courses and can assist superintendents in several constructive ways, Bastis said.

On a basic level, a drone can be used to pre-inspect a particularly tall tree for disease or damage without forcing an arborist to make the potentially dangerous climb. Drones costing as little as $300 to $500 can be used for such a task, he said.

Drones can also be used to help resolve property line debates when neighbouring residents might overbuild onto an adjacent golf course property. Overhead photography paints more of a telling picture than sideways photography, Bastis said, adding the same technique can be used to document changing shapes and sizes of ponds and other features.

Overhead photography shows distinct colour variations of test plots in NTEP (National Turfgrass Evaluation Program) trials and is useful for showing club members the ongoing progress of an on-course construction project. He said the means to document a project’s progress through pictures speaks volumes more than chronicling such detail in words. During greens construction, it can help to better determine the direction of drainage patterns.

Bastis said he wished the technology had existed more than a decade ago when he undertook a greens renovation project of his own.

Aside from their photographic attributes, drones can be used to transport lightweight objects from one point to another. If a maintenance worker at the opposite end of the golf course from the turfgrass maintenance facility needed a fresh roll of trimmer line, one could be transported to him via drone “as the crow flies” rather than being driven in a golf cart along an array of cart paths that might wind in and out of wooded areas and up and down significant changes in elevation. The drone would save both time and fuel.

DRONES will know exactly where to return if communication is lost between the machine and the controller.

Saving time with drones
Drones have the greatest impact on visual inspection and are able to alleviate the time it takes to drive around every square foot of a golf course.

“It takes time to do that.”

Bastis said weather stations serve an important purpose on a golf course, but noted there are often microclimates on many courses that demand more specific readings. Moisture probes have helped in that regard in recent years by providing accurate moisture deficiency data, taking the guesswork out of visual inspection. The probes will provide the superintendent with a number to let him know if watering is required or not. The process still takes time, but flying overhead with a drone equipped with multi-spectral photography capabilities can produce an evapotranspiration (ET) map that will provide daily and even hourly data.

Because a drone flies by GPS, it can be programmed to fly in a consistent pattern, at the same altitude, in the same direction and at the same time.

“It flies a pre-programmed pattern all by itself.”

Bastis said the superintendent doesn’t have much to do in the process. The drone flies down the first fairway, makes a couple of “S” sweeps and then proceeds down the next fairway. It lands and data is automatically uploaded to the data company’s servers.

Information will be relayed to the superintendent’s tablet or cell phone that might indicate a certain percentage of the golf course is going south quickly and pinpoint the areas where attention is needed.

He said he can create his own maps that are sophisticated enough to provide accurate scale and precise distances between points. The maps provide him with the necessary information he requires for watering, providing consistency.

It rains regularly in the San Francisco area from November to March, but the remaining months are dry and irrigation is required daily.

“It’s feast or famine for us.”

The Cal Club has 2,700 sprinkler heads throughout the course that put out 57 million gallons of water a year.

“If I can save 10 per cent of that (through drone-driven mapping), we’re winning.”

Bastis said that although the technology does not yet exist, he believes the day will come when maps will be so sophisticated that they will show where specific turfgrass species grow, allowing them alone to be targeted for such practices as spraying.

He cautioned that superintendents must fully understand the regulations associated with drone use before going out and purchasing one. Canadian regulations, updated last January, are aimed at both recreational and professional use. When drones are operated for recreational purposes, they must fly at least nine kilometres away from all airports and must be in line of sight at all times.

“You cannot use the image transmitted by the drone to qualify as being in line of sight. You physically have to see the drone.”

If using a drone on a golf course or for real estate purposes, a waiver must be obtained from the Ministry of Transportation. If the drone weighs less than two kilograms, an application must be made for the waiver and the operator must abide by several rules. The operator must also have $100,000 in liability insurance and must state where the drone will be flown and its intended purpose. For drones weighing more than two kilograms, the same amount of liability insurance is required and the operator must undergo proper training from a recognized training centre.

“The way they see it is you’re entering into air space. You need to be able to speak air talk.”

The operator must also be able to comprehend such matters as altitude, wind direction and sheers.

Bastis speculated there will be several notable advancements in drone technology in the coming years, but he also suspected operational regulations will become even more stringent.

Why use drones on golf courses?
Reasons why drones are invaluable to golf course superintendents: