Commercial contractors are tuning into the merits of liquid brine 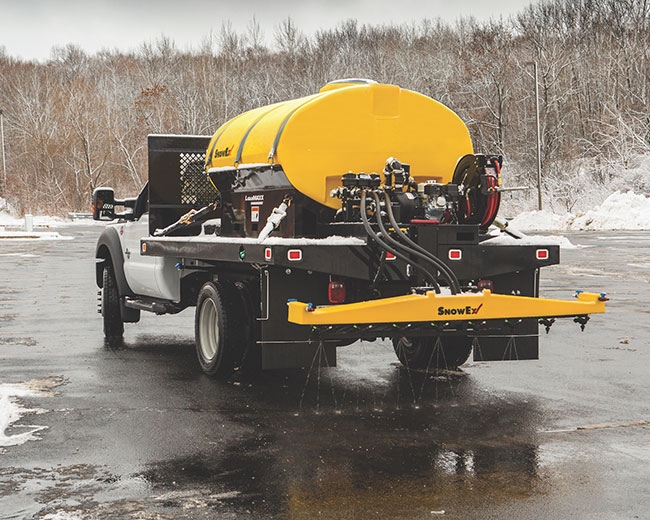 A contractor applies liquid brine to a paved surface.

The process of fighting winter’s wrath has changed a lot over the years. Though the basic goal of removing snow after it has fallen and ice after it has formed remain, it’s how this is accomplished that has become much more sophisticated.

Consider the application of liquid brine. What was once the sole practice of municipalities is now being implemented more and more by commercial and residential contractors alike. The reasons for this growing interest are many, but the main factor is that applying liquid brine simply can do things that other tactics can’t.

Anti-icing is a prime example. This is the proactive process of applying liquid brine to a road, sidewalk, parking lot or other trafficked surface before a winter weather event. Doing so before a storm creates a thin layer of salt between the snow and road surface, effectively preventing it from bonding together. So when one comes back to plow after the storm, the job of clearing the snow and achieving down-to-the-pavement results is much easier. And it requires a fraction of the salt compared with applying granular materials after a storm to achieve the same, or typically lesser, results. In fact, some have reported up to 75 per cent salt savings by anti-icing before an event rather than de-icing with granular materials after.

Then there’s the practice of pre-wetting granular salt with brine. Pre-wetting lowers material bounce from a spreader when de-icing after a winter event, which conserves material and keeps it where it can be most effective. Also, it jump starts the brining process, accelerating the performance of the granular product, as a solid de-icer must first convert into a liquid to counter the ice. Pre-wetting salt has been shown to reduce needed application rates by 20 to 30 per cent.

As is usually the case with any new practices, implementation takes time. That continues to be evident with the use of brine, but contractor interest is booming, and more are adopting the practice each year. Manufacturers have answered, in kind, by developing equipment that simplifies the application of brine for a wide variety of jobs, from walkways and sidewalks to parking lots and arterial roads.

But application equipment isn’t the only development for contractors. Brine makers that are geared specifically for the contractor market are beginning to appear. And given the many advantages that making one’s own brine can deliver, it’s an equipment addition anyone serious about brine application should consider.

Control supply
One major challenge for some to get into applying liquid brine is sourcing the brine itself. The advantages of using liquid brine have been touted to the contractor market for the past decade, and there are many who are convinced it needs to be added to their winter maintenance repertoire. But when materials aren’t readily available, it doesn’t matter how great the process works, it’s just not an option.

As the practice has become more popular, availability has increased. Now many equipment dealers and/or granular salt suppliers are beginning to offer liquid brine as well. Still, there is hesitancy about material availability. For any contractor, the key to success is being able to service customers when needed. They just can’t tolerate a lack of materials.

By adding a brine maker to an operation, contractors don’t need to worry about sourcing a supply. Brine makers work with standard rock salt to create the solution, so as long as a contractor has access to salt and water, he or she can make brine.

Furthermore, it’s easy to store. Contractors can make batches well in advance of a weather event to be ready when needed.

Control costs
Another reason to make one’s own brine is to lower material costs. The practice of applying brine already offers a cost savings as it can reduce salt usage. But, of course, when you make your own materials, you forgo any margin an outside vendor will naturally add to the purchase price.

One ton of rock salt, at $60 per ton, can produce 870 gallons of brine. And the cost of necessary water for that batch is relatively negligible, with the top rate in the U.S. at about $4 per thousand gallons. That comes to about seven cents per gallon to make brine.

Comparatively, the cost to purchase bulk liquid brine through a vendor ranges between 60 cents to $1 per gallon. Taking this a step further, it would take about $2.10 per acre to pretreat with made brine compared to $18 per acre with purchased brine. Assuming one pre-treated 150 acres per storm, that’s a difference in material expenses of $2,400 per event.

Establish a new profit centre
Reducing costs is one way to increase profits, but adding another product/service to sell is even better. As already mentioned, a primary reason for making brine in-house is the difficulty in finding a reliable supply of materials. So why not flip this new ability to become part of the supply solution, selling brine to other contractors for profit?

One of the attractive qualities of today’s brine makers is that they don’t require a lot of hands-on activity to operate. Once the machine inputs are set (water and salt), it works on its own to mix and produce the finished brine. And again, brine can be effectively stored for later use. So there’s not a lot of labour that would go into producing brine to sell, and if one creates more brine than the outside demand, there is no waste as the product doesn’t expire.

Furthermore, knowing the margins typically built into the finished product, becoming a supplier not only adds a fair amount to the bottom line, but it can vastly accelerate the return on investment on a new machine.

It’s relatively simple
Everyone loves the idea of improving effectiveness, reducing costs and increasing profits, but any new process creates added sophistication. And making brine is certainly not without its challenges.

Bear in mind that brine making is chemistry. The ideal salinity for maximum brine effectiveness is 23.3 per cent. Without a controlled process, it would require a lot of knowledge and skill to make it properly.

Fortunately, manufacturers have developed brine makers to take much of the thought out of the process. Today, contractors don’t need to know chemistry to make brine. They just need to make sure the inputs of water and salt are constant and the machine-integrated computer does the rest, ensuring that the equipment is churning out brine at the proper mix ratio.

Also, the process of making one batch or continuously producing brine is relatively simple. A few settings adjustments and hooking the machine up to a separate storage tank lets brine be produced continuously until the storage is full.