How a landscape is designed can play a vital role in the prevention of crime. Sometimes, such considerations don’t go into the planning process, and it’s not until a series of crimes are committed that some retooling might be required.

Constable Steve Mahler of the Hamilton Police Service spoke about crime prevention through landscape planning in January at Landscape Ontario Congress in Toronto, extolling the virtues of Crime Prevention Through Environmental Design (CPTED). 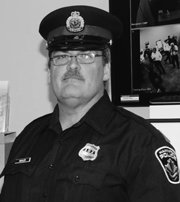 Mahler has spent the past 12 years working with the CPTED program, and has completed more than 500 residential and commercial security audits throughout the City of Hamilton.

He said the idea behind crime prevention is to reduce risk, adding he believes the landscaping industry can do much better at achieving such a goal. By removing the opportunity for crime, it helps to reduce the incidence.

“We want to remove some opportunity for crime and make it more difficult, and it could be very beneficial for yourself and the community,” he said.

Such incidents typically include loitering, trespassing, breaking and entering, office thefts, thefts from vehicles in parking lots, and anti-social behaviour such as drinking in areas deemed out of bounds.

CPTED, begun in the 1960s by a criminologist, works to negate criminal activity from the beginning, during the design stage. It is trying to affect a human behaviour within a space.

“It’s a lot easier to design some of this stuff beforehand,” Mahler said, adding it’s often difficult to correct afterward.

A poor design will support a greater propensity for crime to occur or anti-social behaviour to take place.

Surveillance involves the ability to watch people because would-be criminals don’t wish to be seen.

Access control limits the opportunity for crime by clearly differentiating between public and private spaces. It involves the strategic placement of entrances and exits to control flow and access, adopting fencing, lighting and other landscape features.

Territorial reinforcement is an umbrella design of access control and surveillance built into one, promoting social control through increased definition of space and improved proprietary concern.

Mahler told his audience about a strip plaza which had a history of being broken into, prompting a landscaper to come in and change the grading of the property and add features in strategic places. The procedure helped to reduce the incidence of crime by about 85 per cent.

He also cited a case of a multi-residential condominium property which had been plagued by several residents’ parked cars getting broken into. The situation was studied and it was found that opportunistic people who had no business being there were walking through the property along a pathway which served as a short cut to a bus stop. The solution was to erect a fence which closed off the area. Normal users of the property didn’t mind walking around the fence to access an adjacent park, but it deterred abnormal users who didn’t need to be in the area. Crime was subsequently reduced 40 per cent because of one alteration to the area.

Fencing is sometimes necessary, Mahler said, depending on the location and the users who might be in the area.

Other strategies can be adopted, such as the planting of shrubbery to act as a deterrent for crime.

“It makes things a little more difficult for the abnormal user.”

Good sight lines are critical in landscape design for the purpose of crime prevention. Mahler said there a several residences in the Hamilton area built with people as an afterthought. In one instance, a six-foot fence abutted a main road next to a residential area. It wasn’t necessarily safe for pedestrians to use the main road. But an open fence with an interior route would not only allow users of the sidewalk to see the homes along the way, but people in their homes could also see users of the sidewalk.

Where there is isolation, no one is watching out for one another, Mahler said.

When considering access control, different types of ground cover can be used in the transition from public property to semi-public and non-public.

Mahler said some areas can be targeted for acts of graffiti. Often, it can be triggered by a municipality’s own set of rules and regulations. For example, some municipalities will not permit chain link fences to separate a commercial property from a multi-residential property. Some bylaws state a solid wall must go up instead, and this can lead to an opportunity for graffiti.

“We have to, where we can, try to avoid giving them the canvas.”

The idea behind natural surveillance is to be able to watch people in their day-to-day business. This allows the normal user of a property to feel safer, yet makes the abnormal user feel uncomfortable because he’s being watched. The goal is to maximize the ability to be seen and to see. Ensuring that space is observable is essential.

Many playstructures built in the Hamilton area are located closer to the road and separated by a low-lying fence. This makes it safer for visitors whether it’s in the early afternoon or closer to dusk because they are in an area where they can feel comfortable and not isolated on their own.
Even parking lots which are built within a landscape design are not benefiting from the natural surveillance of people coming and going from a building, which makes it a wonder why so many cars are being broken into, Mahler said.

“We can build in certain aspects of safety and security to parking lots as well which could be very beneficial.”

Gathering areas are often designed as a focal point of a property, such as a sitting or garden area. With good sight lines and upkeep, normal users are allowed to fully enjoy the feature. The abnormal user, however, doesn’t want to go into an area where he thinks he can be seen because he will have little ability to carry out his intentions.

When lighting is incorporated into a design, an even curtain of light should be provided across the designer-intended area. The type of lighting must also be considered, Mahler said.

“So when you come into a park, you can see exactly what is going on.”

Motion-activated lighting is another option. Mahler cautioned it may not always be the answer, especially when installed in an area which isn’t considered safe in the first place, but it can be effective in certain situations. They can be a deterrent to would-be criminals on a property.

Mahler made note of a city property that was once a haven for loitering but had a community garden built in the back with two small plots. One was fenced in to prevent people from entering the area who sought out a short cut.

“They haven’t had any problems at all since then.”

Mahler said people who had once been afraid to emerge from their apartment complex are now coming out and taking ownership of it again. With more normal activity going on, it prevents the abnormal activity from taking place.

He said the project was expensive, but added it probably saved money in the long run due to decreased vandalism.

If landscapers can build crime prevention strategies into their projects, it would be helpful, Mahler said, noting there are more than 200,000 break and enter incidents every year in Hamilton.

“The majority of them are preventable. CPTED can be part of it. I know we can all do better in our communities.”