Central control irrigation is a technology municipal sports turf
managers should consider embracing if they wish to save on water
consumption and achieve healthier turf, those attending last fall’s
Sports Turf Association field day were told.

“There are two specific challenges we want to try to overcome with central control,” he said. “Water is very scarce. How do we save it and make sure we make the best use of it possible when we’re using it in the landscape? Secondly, how do we make our turf healthy and what do we need to do there with central control?”
Cooke, who has worked in all areas of the irrigation industry, including contracting, design, consulting and distribution, said his mission statement was, “Install a central control system in order to produce the best quality of turf and landscape while consuming as few resources as possible.” 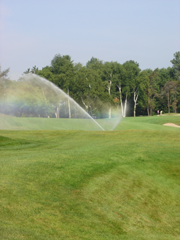 In addition to water, he cited labour, fertilizer, fuel and money among the resources that can be conserved through central control.

Although about 71 per cent of the earth’s surface is comprised of water, the vast majority of it is salt water which is unfit for both human consumption and irrigation. Only a tiny percentage of the earth’s water is suitable for such purposes, so it is important it be used intelligently.

With quality water already scarce, an aging infrastructure is further challenging municipalities in how much water is being used as well as the rates being charged for its consumption. In Toronto, for example, water mains are about 80 years old and experience frequent pipe breakages each year. Resulting leaks cost the city about $700 million each year, Cooke said. There is a water subsidy which deflects those costs, but he said that will change with water costs going up.

Metro Vancouver has a low water rate, but rates have increased there each year since 2004.

Studies show municipalities can significantly help with the amount of water they consume. Cooke said two technicians in Littleton, Colo. had handled its schools’ irrigated sports turf surfaces, saving about $700,000 in water costs over a five-year period.

Water rates are generally two to three times higher in the United States than they are in Canada.

He said with the need for repairs to aging infrastructure in Canada, water rates are apt to increase.

To illustrate his point, he said a break in a two-inch pipe triggering a loss of 28,000 gallons at a cost of $2 a cubic metre over a long enough time period equates to a lot of money.

“It doesn’t seem like a lot, but if you add that up and you’re running 50 systems and this is happening a lot, you can see where it would get out of hand pretty quick.”

“This is a critical measurement when we’re dealing with central control systems.”

Goals are to seek and eliminate both excessive flow and low flow.

According to the Irrigation Association, 90 per cent of all irrigation systems have two settings: on and off.
“That’s not very effective,” Cooke said, adding it might work in water-starved Texas, but not in Canada where its fluctuating climate demands water is necessary on some days and other days where it isn’t. “That’s not a very good way to approach an irrigation schedule.”

The danger of overirrigation is that shallow root systems result. Invasions of weeds, insects and disease can occur if turf is overstimulated with water and fertilizer, he said, noting that if too much water is applied, valuable oxygen will have difficulty getting down to the roots and beneficial microorganisms will be killed.

“So we need to be careful about how much we’re watering.”

Potentially complicating matters is an abundance of thatch which contributes to water repellency in turf, preventing water from reaching the root zone.

Most central control systems, in conjunction with a weather station, will permit minimal amounts of irrigation so that it’s not necessary to water every day.

Moisture-sensoring technology has been making some major inroads in the irrigation business of late, Cooke said, adding to the value of central control.

“I think weather station-based control is probably a pretty good bet in Canada, but moisture sensors can also do some great stuff out there.”

Cooke said sports turf managers can only get out of their central control systems what they put into them. System data is often overlooked, resulting in the proverbial “on/off switch.” It’s important to know what’s going on out there so that vital information can be incorporated into a central control database.

Such necessary information includes spacing of irrigation heads, soil type, infiltration rates, slopes and where water runs off, and wind conditions. That type of data needs to be collected before central control can be implemented.

One needs to take advantage of that effective rainfall when it happens, “and central control’s going to help with that.”

Weather stations can collect such important data as wind speed and direction, solar radiation and relative humidity, all of which contributes toward more effective central control irrigation.

The “set it and forget it” style of irrigation—being turned on in April and off in November—is not particularly effective unless the weather is exactly the same each day throughout that period.

Weekly adjustments can be made by a technician who visits the site each week and makes certain adjustments based on the weather. Although it’s a slightly better method that the “set it and forget it” strategy, it’s still far from being ideal.

Good data is required in order to understand how much water is to be put down. Without that data, sports turf managers could find themselves in trouble, Cooke said.

The turf manager needs to know the type of soil, the plant material, its root depth and how far into the root zone he plans to get his water down.

“We need to know what the client wants. We need to try and do what they need to the maximum efficiency possible.”

The configuration of the sprinklers must be considered, taking note if those which turn only 90 degrees are putting down four times as much water as those doing full circles.

“If we do things like that, we’re running into trouble before we even start.”

The irrigation system can be designed so that the middle of a sports field receives more water than at the edges. With such a design, it’s important to note where most traffic occurs and how the field is sloped. Water distribution, however, must be uniform.

“Saying that pressure-regulated sprinklers are overdesigning is just not true. There are a lot of good water-saving features out there and turf-saving features that can help.”

Pressure regulation isn’t as much of an issue with sports turf, he said. Usually the problem is that pumps fail and sprinklers aren’t throwing water far enough, therefore compromising uniformity. In cases of high pressure, there will often be plentiful mist which, when blown away, waters nothing. Scheduling then becomes much longer and water is wasted.

When looking to install a system, Cooke suggested his audience look for references from irrigation contractors, adding we’re beginning to see more of push towards certification and licensing.

When installing a system, it’s also important to consider its environmental impact, including the dripline of trees.
Backflow prevention and cross-contamination are additional factors to be considered when tapping into a municipal water supply. Municipal watering bans must also be kept in mind, and knowing when are the windows of opportunity for watering.

“It’s really important to have a tight team when you’re doing an irrigation project. Everyone’s a stakeholder in the irrigation project (including the contractor, designer, manufacturer, distributor, water purveyor and end user).”

Once the end user has his central control system in place, he must be mindful of what is happening on the field, checking to see tht sprinklers are level, rotors are turning properly and water is running off the field in the right places. Water running off a field and onto pavement may not be a big issue, he said, but it could be in the event it runs off into someone’s back yard, as has been the case in Toronto. Broken pipes on sports fields can create big holes which can be dangerous if they cause people to fall.

Central control would locate such a problem and alert the end user to the specific zone on the field so that the broken pipe could be repaired.

Cooke said central control systems can save municipalities significant amounts of money, especially with the changing climate experienced throughout a typical playing season in Canada.