Robert Heggie receives the honour which recognizes an individual’s professional ability and contribution to the Canadian sports turf industry and shows appreciation for his or her proactive and progressive efforts within the profession. 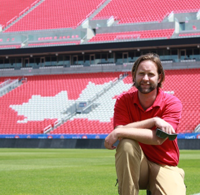 BMO Field is home to Major League Soccer’s Toronto Football Club. Heggie's knowledge and expertise in managing fields for the sport’s highest level of play was not the only reason he was recognized with this honour.

“The resounding thread that runs through Robert’s nomination and accompanying letters of support is his continuing effort to inspire and mentor those students who may aspire to become sports turf managers,” said association president
Tennessee Propedo. “Robert is a frequent guest speaker for students at the University of Guelph, participates in the student-run Turfgrass Symposium, and is always willing to host tours of the Toronto FC stadium field and practice facility.”

By sponsoring this award, the Guelph Turfgrass Institute assists in the recognition of sports turf managers who exemplify vision and leadership in the sports turf industry.

“The GTI is honoured to partner with Sports Turf Canada in this award that helps to promote and recognize outstanding sports turf managers in Canada,” added GTI director Rob Witherspoon. “Robert is a proud alumnus of the turfgrass management and horticulture diploma programs at the University of Guelph who encourages students to consider sports
turf as a career option, and regularly invites both interns and graduates to work with the club’s grounds crew."

Said Gregory Patterson, one such graduate, “I wish that Robert and BMO Field were around when I was attending university; I feel I would have made the move from golf courses to sports turf much sooner.”

The nomination deadline for the 2016 Sports Turf Manager of the Year is Jan. 15, 2016. Visit http://www.sportsturfcanada.com for eligibility, criteria and the nomination form.