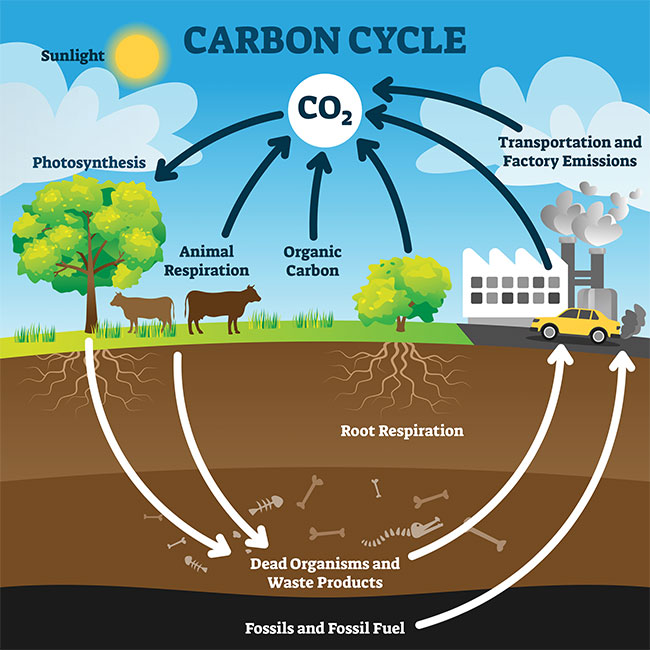 As Canada and the world strive to significantly reduce greenhouse gas emissions in hopes of meeting targets set for 2030, professionals employed in the turfgrass industry can play a key role in helping to achieve this goal.

The Compost Council of Canada, in partnership with the Soil Conservation Council of Canada, have developed a “roadmap” for Canada, entitled, “Recruiting Soil to Tackle Climate Change.” The document outlines how the agricultural and turfgrass sectors can enhance soil health by including beneficial organic amendments, including compost, in their programs and keeping soil organic carbon in the soil.

Glenn Munroe, manager of special projects with the Compost Council of Canada, spoke in January at Landscape Ontario’s virtually delivered Landscape Congress, highlighting the document and explaining the benefits of carbon sequestration as a means of fighting
climate change.

The report notes that soils have the potential to completely offset agriculture’s greenhouse gas emissions footprint.

He acknowledged the problem facing the world today is that most of the carbon formerly found in the ground – in fossil fuel deposits – is now ending up in the atmosphere. It is estimated there are about 750 gigatonnes of carbon in the atmosphere at any given time, and the number continues to rise. Significant amounts of carbon are found in fossil fuel reserves and, as they’re burned, carbon is being added to the carbon cycle at extraordinary levels.

“And that creates a problem,” Munroe said.

The earth is currently “running a fever” with climate change, especially in the north, he added. Temperatures are rising in the polar regions at a faster rate than in other locations around the world. Weather extremes have become commonplace in recent years, and more are likely to be experienced in the years to come, he predicted.

The urgency directed at ending the heating up of the planet is based on these weather extremes as well as the melting of glaciers, the acidification of the oceans and other climate change-related issues.

Munroe said science suggests about a tonne of carbon for every hectare of every year can be sequestered in the ground. Using an industry analogy, he said one golf course could conceivably reduce carbon emissions by about 48 tonnes annually.

The five principles
There are five principles involved to help make this happen, he said. The first is to keep live roots in the ground. Growing vegetation draws carbon dioxide from the atmosphere.

“The more carbon photosynthesized, the more ends up in the soil where the soil organisms can do their work.”

Soil disturbance should be kept to a minimum.

“Disturbing the soil in any way is like wrecking somebody’s home,” Munroe said about the second principle.

When soil is disturbed, a complex ecosystem is broken up and important fungi can be significantly damaged. Occasionally, soil must be disturbed, such as when planting a tree, but it should otherwise be kept to a minimum, he said.

The third principle is to optimize inputs which includes using compost and proper amounts of nutrition.

“Excess nutrients in the soil is a recipe for losing your carbon.”

Promoting diversity in the soil is the fourth of five principles. Munroe said diversity above ground leads to diversity below the surface.

The fifth principle, he said, is to ensure the soil remains covered. If it isn’t, weather will affect the organisms living in the soil, and they will either die or become dormant.

Soil should act like a sponge, Munroe said, noting that when rain falls, water must fill the holes to prevent runoff and flooding. Soil structure, therefore, should be “crumbly” and aggregated, he said.

Without well-structured soils, populations of beneficial soil fungi will be sparse, Munroe said, cautioning that synthetic inputs – especially fungicides – can be detrimental if not used carefully.

“They kill the bad buys, but they also kill the good guys.”

If good soil health can be achieved, fungicides may not be necessary, he said, adding fertilizers must be used appropriately and carefully. By soil testing regularly, only certain inputs will be needed.

Munroe urged the input of compost tea extract and the mulching of grass clippings when maintaining turf, noting compost helps to build and sustain fungal populations and, by association, soil structure.

“It brings you good levels of beneficial fungi.”

Those who manage soils can help control climate change by sequestering carbon. It’s the soil’s organisms that are doing the work and helping to mitigate climate change, he said, adding that failure to create a soil sponge without good soil structure will require having to continually add inputs.

The use of compost will make the effort work better and more carbon will be sequestered, he said.

To download a copy of “Recruiting Soil to Tackle Climate Change,” visit http://www.compost.org/wp-content/uploads/2022/04/Recruiting-Soil-to-Tackle-Climate-Change.pdf