While many landscape contractors have traditionally launched their businesses with a truck and a mower, Beamish Landscape Services of St. Thomas, Ont. began as a design-build company and later added maintenance to its array of services.

Company president Bill Beamish, whose business card states he is a “journeyman horticulturalist,” made his foray into landscaping shortly after completing high school. At the time, he was working as a groundskeeper at a mausoleum construction factory in the Toronto area, and was encouraged by the company owner to pursue a formal post-secondary education to further his knowledge of the industry. 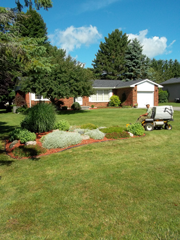 Upon graduating from Humber College, he found work with an architectural landscaping firm in Toronto where he remained employed for the next three years. The job involved landscaping work in season and renovation work during the winter months. For each of those three years, Beamish helped with a single house construction project in addition to summer landscaping work.
It was while engaged in the home-building project that the foundation for Beamish Landscape Services began to take root.

Beamish met the woman he would marry, who was from St. Thomas, and the couple decided it would be much more affordable to settle in her hometown than the Toronto area.

For the next few years, he worked for a couple of local landscaping companies before deciding to strike out on his own.
He landed his first several jobs from leads found in the local market paper, but decided in his second year of business to exhibit at the local home show, “and things really took off.”

The home show produced about 20 good leads for the young company. Work was strictly construction at the outset, but Beamish figured incorporating maintenance work one day a week could bring in some additional money. The strategy soon blossomed into two days each week of maintenance work.

“When it got to the stage where it was more full-time, we hired guys to just do the maintenance end of it.”

The move also allowed Beamish to concentrate solely on the construction end of the business. Both services have since mushroomed over the past couple of decades and complement one another. In more recent years, snow removal and a full gardening service have been added to the company’s customer offerings.

“But the maintenance kept food on the table.”

At the outset, the maintenance end of the business was conducted with a fleet of second-hand push mowers which would be serviced until they died. Today, Beamish’s maintenance wing includes state-of-the-art lawn care equipment featuring high-tech grass-handling systems. Diesel and fuel-injected gasoline engines help to maximize savings in fuel efficiency.

Beamish said the construction end of the business accounts for about 60 per cent of his in-season business while maintenance and gardening make up the remainder.

He confessed that maintenance was originally not an aspect of the business that particularly excited him, but noted, however, it proved to be a vital addition and remains so.

Today, Beamish’s maintenance crews look after about 90 lawns a week while its gardening division is busy with about 35 properties situated in the St. Thomas-Port Stanley corridor. Its clientele is mainly residential in both construction and maintenance. Four two-person crews operate daily to look after construction, maintenance and gardening work.

“We know how to service our customers and keep them happy and know how to put out the fire if something comes up that’s related to that.”

Its snow removal service has recently expanded toward the Aylmer area. Last year’s horrific winter, which impacted most of Canada with record snow accumulation and frigid temperatures, kept Beamish busy. Snow removal began last year on Nov. 21, and the company’s final salt application was done in mid-April. Two employees were kept on full-time during the winter to keep up with the work.

The busy winter season proved to be somewhat bittersweet for Beamish Landscape Services. Snow removal and salt applications kept the company in the black, but the length of the winter season resulted in more of a break even situation. In a normal year, both construction and maintenance work begin in March, but the month was lost to the prolonged winter which also set things back well into April.

Beamish’s gardening service has been perhaps its biggest growth area in recent years.

Although most of Beamish’s seasonal employees have been with the company for five to seven years, newly-hired workers traditionally get their start in gardening where they are taught to weed and look after beds.

“If they’re a good gardener, we’ll leave them in gardening. If we see another skill where they might be a better fit for construction or maintenance, we bring them up into those areas.”

Beamish said the rule of thumb for full-time employees is to get a taste of all of the company’s services and then stay in the area for which they are best suited.

Some of Beamish’s customers prefer to mow their own lawns, but wish the company to look after their gardening and pruning needs.

His customers’ spraying needs and much of their fertility requirements are sub-contracted out to Bobby Lawn Spray of London. Beamish said he advises potential new maintenance customers who desire a tiptop lawn to first hire a lawn care company and purchase its gold package for the first two years.

“Stay on that for two years and then decide where you want to go,” he said, noting the base work in then done and pests are under control.

“If you’re going to spend $200 or $300 a month with us to do your lawn care and you want it looking just so, to not put another $40 into it to have a spray program seems ludicrous to me. You’re kind of shooting yourself in the foot.”

In order to give his employees some time off during the summer, Beamish shuts down his business during the first two weeks in August.

“We find that’s about the slowest time of the year around here. Half the maintenance guys stay for the first week and half of them stay for the second week, and then we buffer in with our construction guys.”

“There’s a few less guys on the crews, but everything is still moving ahead.”

All of Beamish’s employees undergo safety training through LS Training of London in addition to workplace hazardous materials information system (WHMIS) education and bi-weekly safety meetings. Occasionally, additional information is shared with employees such as a recent lecture by a local health unit official who spoke about sun safety.

Beamish had once been the head designer for the company’s construction projects, but he handed the position over about 10 years ago to another individual who eventually accepted a position with the City of St. Thomas. For the past seven or eight years, Shannon Martin has taken over as designer in addition to heading the gardening department and providing employee safety training.

Beamish said he is content with the current size of his operation, adding there seems to be plenty of work to go around for other landscaping firms in the area.

“We’re comfortable with the way things are now.”

The company is usually booked six to eight weeks ahead for major construction projects and two to three weeks ahead for its gardening crews. Weeding is an ongoing concern, but mulching and new planting jobs are booked in advance.

Construction jobs can range from the small, about $5,000, to the large, upwards of $120,000. Smaller jobs might include a raised stone patio, a retaining wall or a small water feature. Larger projects, which might keep workers on site for more than a year, include the construction of an outdoor kitchen and managing a pool installation.

Raised patio construction has become a popular wish among customers because of their lasting ability when compared to wooden decks. Many of the company’s raised patio projects have incorporated outdoor fireplaces.

For more elaborate projects, which might involve the hired services of an engineer, the dynamic of the quote will be affected.
Beamish said if there was one aspect of the business he might consider downsizing, it would be the winter snow removal portion, suggesting he appreciates having some time off during the off-season.

The demands of the past winter kept him hopping, but he anticipates the next few winters will be traditional in scope.
It’s still a challenge to keep his winter customers satisfied. During bigger snow events, commercial properties are given precedence Monday through Friday and are mainly parking lots.