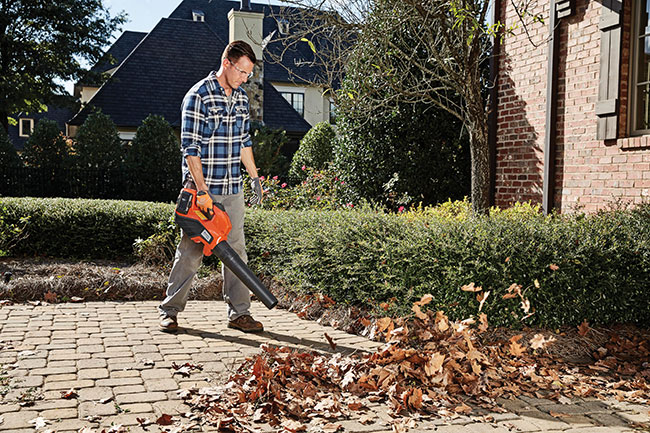 A recently passed law in California will ban the sale of new gasoline-powered landscaping equipment by Jan. 1, 2024. The legislation encompasses blowers, mowers, trimmers, chain saws and other small-engine equipment, and is aimed at reducing the state’s overall emissions of pollutants.

Can similar legislation be far behind in Canada?

One product that tends to be singled out as the “bad guy” among gasoline-powered landscaping tools is the leaf blower, which is being attacked on two fronts – for its emissions and its noise output.

“We’ve spent literally millions to reduce that noise level and, when people criticize blowers, it’s probably more along the lines of an electric than a gas,” Hugh Munn, Ontario and Western Canada sales manager for Stihl Limited, said. “We’ve dramatically reduced the hydrocarbons that a blower produces. Stihl’s best-selling backpack blower produces 17 grams per kilowatt-hour. Going back to the late 1980s or early ‘90s, a comparable model would have produced about 185 grams.”

Although vast improvements have been made to gas-powered blowers in recent years, professional landscapers aren’t as quick to embrace their battery-powered counterparts as they have with other landscaping tools run by battery.

“The way blowers draw power, there’s still a pretty big gap in performance from battery-powered blowers to gas,” he said. “There’s a huge gap in blowing performance, but also in run times. It’s the one application where gas truly doesn’t have an equivalent battery version of it.”

Wilk said lower-power applications, such as hedge trimmers and some string trimmers, achieve similar performance when comparing battery power to gasoline. But, blowers need a significant amount of power to move their fan, and battery-powered blowers don’t provide the same performance, run time and ease of refueling as gas-powered models.

Keith Coultrap, director for Husqvarna’s professional brand, said battery-powered blowers can achieve the day-to-day needs of professional landscapers, but added they may not have the power required for the fall cleanup of wet and heavy leaves that gas units provide. He said the advantage of battery-powered blowers and other tools is that time isn’t wasted with constantly starting and stopping throughout the work day. They don’t require a pull start and are much less “finicky” in colder weather.

Impact of switching to battery
The City of Vancouver is asking for submissions to potentially trend toward batteries from gasoline in powering landscaping equipment. Munn said municipalities that have considered bans on gasoline-powered tools, such as blowers, have found their own parks and recreation staff have said labour costs are likely to increase as a result.

“We have to remember it’s a hell of a lot easier to blow leaves than it is to rake leaves, and you’ve got repetitive motion injuries to the user,” he said. “A lot of landscapers just won’t rake leaves. They refuse. They won’t do it. They see it as a menial task.”

West Vancouver has invoked a noise restriction on blowers, but gas blowers aren’t banned as long as they meet published noise limits, and then must be labeled as such.

“We do sell what are called low-noise, gas-powered blowers,” Munn said.

The City of Vancouver is contemplating whether it’s time to switch its municipal equipment fleet from gas to battery.

Munn said Stihl is supportive of municipalities’ desire to reduce their noise and emissions outputs, adding, “The issue we have as a manufacturer is that what is being communicated is truthful.”

He said he had attended a meeting where an individual claimed backpack blowers generate more pollution than seven Raptor trucks.

“That’s just nonsense,” Munn said, suggesting such data was 20 years old. “Our handheld power equipment gets a bad rap because we look at stuff that was built in the ‘70s.”

He reiterated that governmental mandates to reduce emissions, in both Canada and the United States, have resulted in millions of dollars spent by the industry to comply.

Stepped-up R&D
John Powers, director of product management at Echo Inc., said research and development efforts have been stepped up considerably in order for gasoline-powered equipment to become emissions and noise compliant.

“We’ve been involved in making blow emissions equipment ever since the first regulations came into effect back in the mid-to-late 1990s,” he said. “Since that time, we’re reduced emissions on our gas equipment by over 90 per cent. It’s a huge amount since that time period.”

Powers added that in addition to stepping up its emissions reductions, Echo has greatly reduced the noise output of its gasoline-powered blowers.

“We still have several low-noise gas blowers today in our lineup,” he said.

Coultrap said Husqvarna will continue to offer both gasoline and battery-powered tools to its landscaping customers “so that they can choose what they want, based on their unique needs and their unique market.”

He added that until landscapers’ needs can be fulfilled by a complete battery lineup, both gasoline and battery-powered equipment will continue to be offered to professionals.

A number of commercial and residential customers of landscaping firms have become more environmentally conscious in recent years and are making their voices heard in some circles. Mike McConnell, national sales manager for Echo Power Equipment (Canada), said TLC Landscaping in London, Ont. has entire crews dedicated as cordless operators.

“While we’re seeing a shift, we’re definitely seeing more and more crews picking up portions of their trucks and – with TLC – an entire truck, so they’re doing dedicated jobs.”

One of the advantages landscapers are realizing about battery-powered equipment is the reduced amount of maintenance required in comparison to gas-powered tools. The lack of air filters, fuel filters, carburetors, fuel tanks and not having to mix gas and oil are viewed as pluses in battery’s favour.

The key to the performance of battery-powered equipment lies with the battery itself.

“The challenge there is to come up with newer and better batteries so that the user gets a longer operating time,” Munn said, adding Stihl is introducing a “wafer-style” battery configuration. “The premise is the same. You just layer them. You get more energy out of that configuration than the cylinder configuration.”

Thinking of the future
The mindset among younger landscapers tends to differ from that of older generations, Munn said, suggesting they are more environmentally conscious about the future.

“Landscape contractors are much more open to battery tools than they were 10 years ago because the battery tool has improved a lot, and they’re starting to realize they can be just as productive.”

“In situations like that, landscapers typically want to start very early in the morning so they can be done before the peak temperature in the middle of the day, and the battery equipment helps them to start earlier in the day without disturbing anyone in a residential environment,” he said. “That allows them to finish earlier in the day so they can avoid the peak heat and have less fatigue.”

The amount of energy that can be stored in a battery is limited, but lithium-ion battery technology continues to improve, Powers said.

“As that continues to increase, I think adoption by professionals is only going to increase,” he said, noting battery-powered hedge trimmers are likely to experience the highest rate of growth since they don’t require the same amount of power as other tools.

Migration toward battery
Munn said he believes more landscapers are migrating toward battery-powered equipment, adding he anticipates the demand for battery-powered tools will be significant as we approach 2030 – the year Canada has targeted for a 30 per cent reduction in emissions from 2005 levels.

“We’re seeing significant changes each and every year,” he said. “Our battery business has gone up dramatically.”

If a landscaper was looking for a particular battery-powered piece of equipment 10 years ago, he might have had difficulty finding what he wanted, Munn said. Today, however, it can be found readily.

Jack Easterly, product manager for Husqvarna’s professional brand, said he figures there will be more performance, less weight and better efficiency in battery equipment over the next five years.