Painting sports fields is much different from painting walls 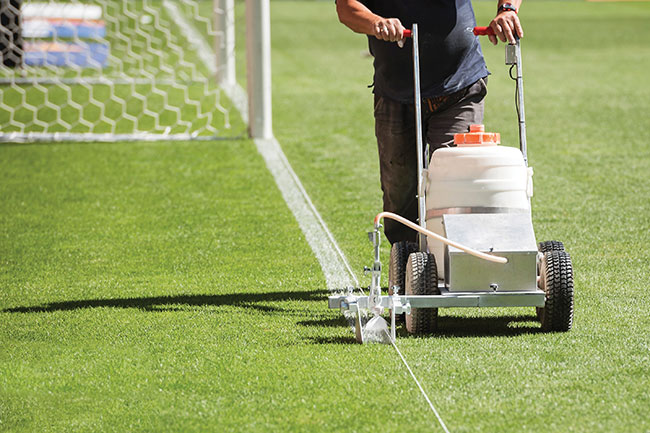 The right spray tip must be used when painting lines on a sports field with the goal of simply coating the leaf tissue. Photo credit: Dziurek/Adobe Stock

There’s a lot to be considered when painting lines, hash marks, numbers and logos on a sports field. The paint must be easy to use, effortless to dilute, give “pop” to the field’s aesthetics, and minimize the amount of damage to the turf plant.

Unlike paints used on interior home walls, athletic field paint on natural turf is meant to remain intact for a short period of time – usually a week or so – and look good under lights.

Field paint research isn’t new, he said, noting studies have been made to examine its impact on transpiration, canopy temperature and photosynthesis light quality. Further studies, however, are exploring ways to extend the life of a painted line, learn more about workable ratios of paint to water, and examine improvements in its applications on synthetic turf surfaces.

Unlike wall paints, which can be applied atop a white primer, athletic field paints must adhere to tight specifications within pH levels on natural turf surfaces and can’t be allowed to stray far off the spectrum before the paint becomes toxic to the turf plant.

Field paint is typically made up of pigment, glue, water and additives that include thickeners, surfactants and biocides. White pigments are usually titanium dioxide, clay and calcium carbonate and come in a variety of grades, from white to a dull brown.

“The closer you get to a bright white, the more you’re going to spend,” Thoms said. “There’s more pigment in there as well.”

He said the highest quality ingredients are used to make athletic field paints. A computer-guided system is used to obtain an exact colour match.

Glue is the paint’s binder. Latex is the most frequently used binder in field paint due to its unique structure and its ability to be reduced with water.

“Latex works well with water, so that’s positive for those who want to stretch their budget and water down their athletic field paint.”

Once dry, the paint forms a unique layer of polymers structured in a lattice-like arrangement. The lattice system is a series of crosses that build onto each other, allowing the plant beneath to breathe and transpire because it isn’t a solid coating.

Heavily coated field areas will sometimes require the placement of sod over the paint, “so there has to be a better management method than resodding all the time.”

The cost of paint
Thoms said Iowa State uses 140 gallons of paint per game on its premier game field. This includes the need to paint large logos in both the end zones and mid-field plus the traditional field markings. Over the course of a season, 1,120 gallons are needed to paint the field. A gallon of paint that once cost $15 turned into a $16,800 annual expense for the premier field alone. With four practice fields and several others requiring paint, the cost to the university is significant.

Many Canadian municipalities have limited budgets and wish to find ways to stretch their dollar further when athletic field painting is required. Research is being conducted to see how much water versus paint can be mixed to add longevity to a can of paint without compromising the quality of the markings. Typically, the mixture ratio is three parts water to one part high-quality paint that contains plenty of good white pigment. Thoms said the mixture stands up as well as a one-to-one ratio with a lower-quality white pigment.

Water content is especially important in field paint for synthetic turf surfaces. Many removable synthetic turf paints contain a chemical compound that requires plenty of water to prevent clogging of the turf backing. When removing paint from synthetic turf, the material is washed through the backing and out the bottom to the root zone. Synthetic turf typically drains quickly because of the array of holes in the backing, but paint that isn’t efficiently washed away can build up and clog the holes. This can hamper drainage during a heavy rain event and cause the crumb rubber or cork fragments to move about and create other concerns.

Crumb rubber clumping
Thoms said that when synthetic turf paint isn’t properly removed, it can lead to the crumb rubber or cork clumping together to form a hard and firm surface, creating a possible injury hazard for athletes.

Turf paint not properly removed from synthetic surfaces can also produce “shadowing,” or a lingering impression of a marking where a little bit of pigment remains behind.

Thoms said there are field paints intended for natural turf that lack a latex binder and can easily be removed with water. Sports turf managers find these products work well as long as no rain is forecast during a game, or a heavy dew isn’t expected. He said these paints are more “chalk-like” compared with traditional field paints, and lines and logos will disappear quickly during a sudden downpour. An advantage of this paint type, however, is that if a logo needs to be painted quickly for a “one-off” event, “this is the way to go for natural turf.”

Research at Iowa State University has been conducted to learn how soil’s physical properties change with repeated paint applications. Four different scenarios were studied: painting once a week, once a month, once every two weeks and unpainted control. Paint was applied in a one-to-one, water-to-paint ratio using a Graco handheld painter. The paint was applied evenly and at the same height for each plot.

The six-month study mimicked a typical season in Iowa with researchers focusing on water infiltration rates and particle size analysis based on fine gravel, very coarse sand, coarse sand and medium sand. Decreases in water infiltration were observed in plots painted weekly and once a month. Athletic field paint caused root zone mixtures to shift with a larger percentage of coarse material from the original mixture. Thoms surmised two possible reasons for the shift: paint acted like a glue and was binding smaller particles together; and repeated paint applications were building up in the root zone, making it a fine gravel material.

No increases in silt and clay-sized particles were seen. Water infiltration was reduced in two of the three painted plots compared to the unpainted control plot.

Researchers also wanted to know if athletic field paint differently impacted specific turf species and weeds. Although most athletic fields tend to be predominantly Kentucky bluegrass, they are rarely mono stands, and weeds often have a presence due to pesticide restrictions. The study found field areas covered in weeds were 50 per cent harder and had a bearing on both turf quality and safety. Researchers were curious to know if added paint contributed to those concerns.

The study included Kentucky bluegrass, crabgrass, dandelions and white clover. The sampled areas were maintained at three inches and mowed twice a week to simulate an athletic field. The plots were also irrigated at about an inch per week to ensure they weren’t stressed.

“We knew the paint would stress them, so we didn’t want to stress them with anything else.”

Fertilizer was applied throughout the study to ensure the plots had ample nutrition.

Data indicated the growth rate of dandelion and white clover wasn’t conducive for repeated paint applications and that more paint would be required if those weeds were prevalent on a field. Broadleaf species will not maintain paint applications as well as grass species, Thoms said, adding it was also decided that paint curing times would be longer on weeds.

He recommended using a wand or an extension to limit the amount of paint buildup, suggesting less paint will be required, more even applications will be made, and it will be easier on the applicator’s back. Spraying should be done at as low a pressure as possible with the correct spray tip, aiming to coat the leaf tissue as opposed to blasting paint down into the root zone.

If painting by rollers, only the leaf tip is meant to be coated. Thoms warned not to over-apply paint which could result in it moving off the leaf tip and getting into the soil.