Features Profiles
An opportunity of a lifetime 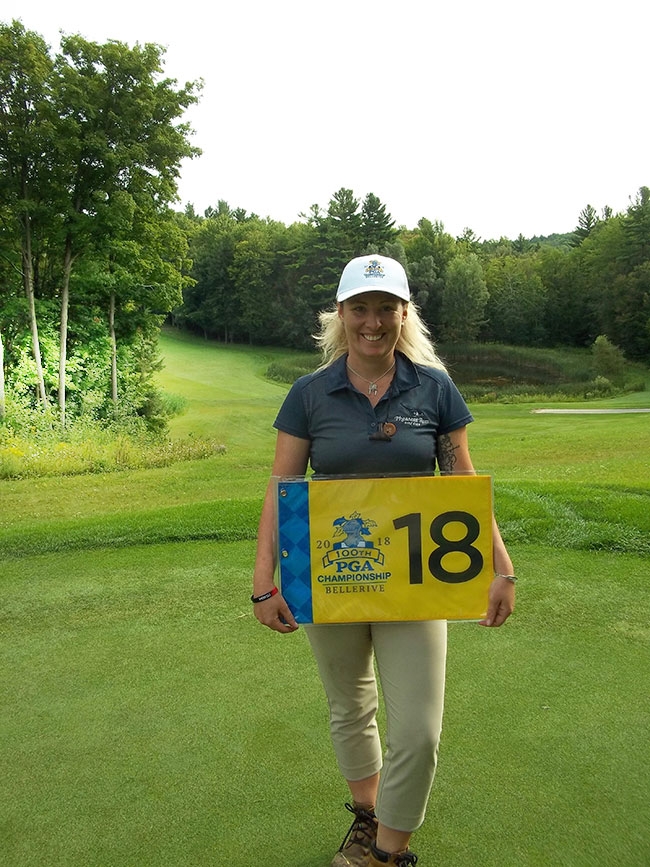 Being in the right place at the right time paid off handsomely for a golf course superintendent from East Gwillimbury, Ont., creating a once-in-a-lifetime experience for the young woman.

Leasha Schwab, superintendent at the 27-hole Pheasant Run Golf Club, spent nine days in St. Louis, Mo. in August, volunteering at the 100th PGA Championship – the fourth and final major on the PGA Tour schedule. She was one of three women on the 150-person grounds maintenance crew – bolstered by 90 volunteers – and believes she might have been the lone Canadian on board.

Volunteerism at PGA Tour events is common practice among golf superintendents. It is a chance to network with others in the profession from across North America and around the world, and often participating superintendents can reap valuable information and skills they can utilize later at their own courses.

For Schwab, who was recognized last spring by Turf & Rec as one of Canada’s top 10 turfgrass professionals under the age of 40, the opportunity to volunteer at St. Louis’ Bellerive Country Club originated from a seminar she attended last winter at the Golf Industry Show in San Antonio, Texas. The seminar – about people in culture – was co-presented by Grant Murphy, associate superintendent at The National Golf Club of Canada, and Carlos Arraya, superintendent at Bellerive.

After meeting Arraya, Schwab stayed in touch with him during the months that followed.

“We’re both quite interested in people and culture and leadership,” she said. “I’ve been asked to give a talk about people in culture in Seattle this coming December. We’re both on that same wavelength. It’s always really nice when you talk to someone that is into that stuff as well.”

Much of Schwab’s exchanges with Arraya have dealt with the subject of diversity in the profession. Arraya is Puerto Rican, Schwab is female and her assistant is Jamaican-Irish. All are minorities in a predominantly white, male profession.

“We always joke that we’re the most diverse club because I’m a woman superintendent with a black assistant – and you don’t get that very often – so Carlos and I talk a lot about stuff like that because he’s Puerto Rican.”

Arraya is one of only a few superintendents from among visible minorities to have been host for a major golf championship. While reviewing volunteer applications for the PGA championship, he called Schwab to request her presence on the crew, saying it would be good to have some female representation.

Going to St. Louis
She felt honoured to be requested for the team, but her immediate reaction was to think there “wasn’t a chance in hell” she could justify taking the time off from Pheasant Run in August. Schwab chose not to make the decision by herself, however, and consulted with both her club owner and general manager, informing them of the invitation yet noting her concerns about the nine-day absence from work.

“Your crew is awesome and can cover for you while you’re away,” Schwab said she was told. “I’m so lucky (to have the crew she has, some of whom were with her when she was superintendent at Foxbridge Golf Course in Uxbridge, Ont.). I have an amazing crew. I’m never ever worried about them making the right decision on my behalf. It’s really nice that my owners recognize that as well. They said, ‘This is something you need to do. This really isn’t an option. If you’re invited to the 100th PGA Championship, you go to the 100th PGA Championship.’”

Pheasant Run covered her return airfare to St. Louis while Bellerive and John Deere paid most of her other expenses.

The invitation to join the volunteer crew at Bellerive came with a special request. She was one of four volunteers asked to sit in on all of the management meetings each afternoon during the week of the PGA, getting an inside look at how such an event is run.

“He (Arraya, who was heading his first ever Tour event as a superintendent) was trying to promote diversity, and it also gave us an inside look at how to run a PGA championship.”

Schwab arrived in St. Louis on the Sunday prior to the major’s Thursday start and attended her first volunteers’ meeting. The group had to catch a shuttle at 3:30 a.m. each day to get from their hotel to the golf course and begin work for the day, finishing at about 8:30 a.m. They would return to their accommodations for a nap before resuming work at 4 p.m. The day’s work concluded anywhere between 9 and 11 p.m.

During her first couple of days, she operated a Buffalo blower or a backpack blower but then switched gears to cut fairways for the duration of her work period.

“I was so scared. I can’t remember the last time I operated a fairway mower, and I had never ever driven a John Deere mower in my life.”

She found the experience to be much like riding a bicycle, but she was taken aback one day when she discovered a hydraulic leak that had developed which added to the attention she was already generating.

“I don’t think anything attracts a camera crew more than a blonde chick on a fairway mower. Oh, my god! I had my own freakin’ photo crew following me around. It was so uncomfortable. I was no nervous I could feel my heartbeat in my ears.”

She mowed either in the morning or afternoon and found the zoysia grass fairways to be more rigid than what she was accustomed to.

A rewarding experience
In spite of her case of nerves and mowing a warm season grass unfamiliar to most Canadian golf superintendents, Schwab said she found the volunteer experience rewarding and was impressed by how well Arraya was able to lead such a vast army of volunteers. She said she was amazed by how he inspired everyone to do their best work and how focused he was in spite of the fact that the PGA Championship coincided with the two-year anniversary of his 21-year-old son Isaiah’s untimely death. To help lift his spirits, each of the volunteers wore wristbands with Isaiah’s name inscribed on them.

Arraya’s leadership abilities were inspiring, she said, adding he kept everything in perspective throughout the tournament.

“Leadership drives everything. I was picking up leaves (by hand) around bunkers. You would not think that was an important job, but it filters down to everything.”

She said she was moved to pick up leaves to prevent them from entering into bunkers because of Arraya’s encouragement to have everyone do his best work.

Arraya also did a notable job at assembling a team that had plenty of diversity. Although most of the volunteers were American, others represented Scotland, Australia, Mexico, Costa Rica and Canada.

“That was his goal…to make sure there was a lot of diversity, and he did a really good job of that.”

Schwab said St. Louis isn’t known for its acceptance of non-white races and cultures, yet whites, blacks and Latinos all mixed together in harmony at Bellerive.

“That is a positive thing.”

Schwab said that she likely wouldn’t volunteer at another Tour event again unless it was on a grand scale.

“It would have to be something pretty special. I left so inspired coming back here, just really wanting to bring our team together, heighten our organization….”

Something she hopes to incorporate into her role as a leader at Pheasant Run is to have regular one-on-one meetings for 15 minutes each week with her maintenance staff. It’s a strategy Arraya has adopted to help boost staff morale and get to know his staff better.

“It’s hard to be around someone like Carlos and not get so wrapped up in the leadership part of it.”

The PGA Championship experience was something that came about for Schwab because she decided to support Murphy when he spoke with Arraya at last winter’s GIS.

While in San Antonio last February, Schwab hosted an event for women in the golf industry that attracted more than 80 people. Only women were invited to the inaugural event that is slated again for 2019 at the GIS in San Diego, Calif., but this time men will be invited to the session that follows a women-only cocktail hour. Restricting the entire event to only women last winter was done on purpose.

“You can’t host a women’s event for the first year and invite men. It’s not going to have the same impact and feel that it needs to have.”

The goal of the event was to allow women in the industry a chance to meet one another and develop new friendships.

“Did that mean I was starting a whole women’s movement? No. I just thought it would be nice for women to get to know each other. There’s a vast difference.”

Schwab said she has no agenda regarding any type of a women’s movement, adding the industry should be all-inclusive, no matter the person’s gender or ethnicity.

Being pro-woman and anti-man is not the same thing, she said, adding she encourages women to want to enter into the golf industry.

“The only reason I am where I am is because of the men in this business. They have helped me the most. They are who have inspired me the most.”

Those who have visited Pheasant Run have told her that it is funny how different she really is in comparison to how some perceive her. Among her male-dominant peers, Schwab feels she is accepted “100 per cent” as a professional equal to them.

“I think a lot of the reason that women aren’t in this industry is because they don’t really know. If women can be seen in a particular industry, others will flock in that direction.”

Related
Superintendent sets her course on path of sustainability
Editorial: in praise of leading women
CGSA conference comes to Banff
Superintendent’s course knowledge may give him edge in championship