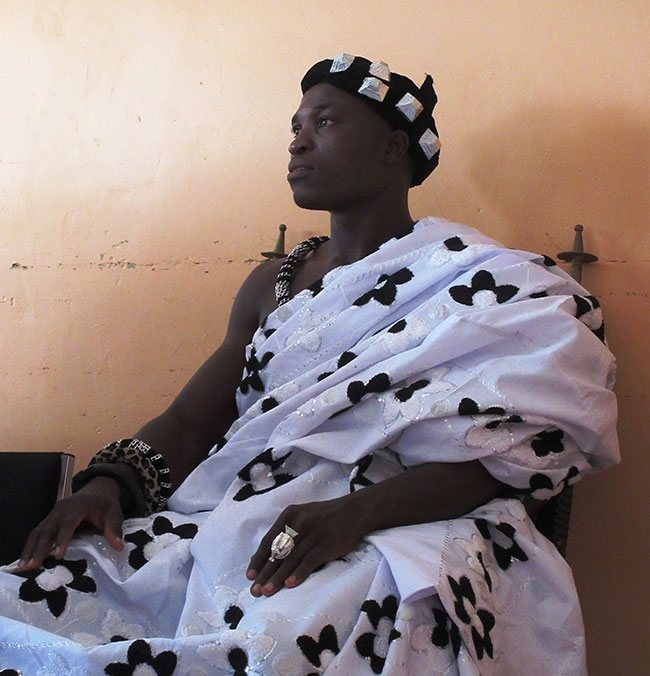 A British Columbia landscape contractor has African royalty on the company payroll.

While living and working in Canada, he is Eric Manu, an employee of S. Watson, The Landscape Consultants in Langley, B.C. When he returns to his native Ghana, however, he is Nana Afori Paaben II, chief of the Akan tribe in the village of Adansi Aboabo No. 2 in the country’s southern region.

The 32-year-old Manu is one of nine employees working for S. Watson, The Landscape Consultants, which is a design/build/maintenance firm serving the province’s Lower Mainland. He was hired three years ago after being recommended by a former employee who left the company to pursue a career in policing. Both were members of the same congregation at their local church.

She said he has adapted well to working with such power tools as blowers and trimmers that are scarce in his native African community, where a simple rake can be hard to find.

“He’s caught on quickly,” she said. “He’s a strong young man who’s capable of lifting and digging and all that’s needed.”

Manu tends to a number of tasks as an employee of Watson’s, including construction work and such maintenance jobs as mowing, hedge trimming and tree planting.

He came to Canada originally in 2012 after marrying a Canadian woman he met while working as a museum tour guide in Ghana. His wife, Dorrie, had been part of a group touring the museum and later engaged in a question-and-answer session with Manu. From there, they exchanged contact information that led to further visits by Dorrie to Ghana. Their relationship blossomed which led to marriage, leading Manu to relocate to Canada.

“I’ve been moving back and forth since then,” he said.

In 2013, Manu’s uncle died which prompted a return visit to Ghana to attend his funeral. His uncle had been chief of the Akan tribe in Adansi Aboabo No. 2 where he presided over a community of about 6,000 people.

It was then he learned he was next in line to succeed his late uncle as tribal chief.

Since his ascension to leader of his native community, Manu has managed to balance two distinctly different positions in two different countries. He lives the majority of the year in Canada where he continues to live with his wife and work for Watson, and helps to raise much-needed money and goods to help improve the standard of living in his native village.

For about two months each year, he returns to Ghana to serve his people. As chief, he acts as a liaison to the country’s government, serving as a spokesperson for his community in hopes of achieving a better standard of living, including enhanced health care and education. Additionally, he must act as a diplomat in cases of conflict within his own community and use his influence for the betterment of the village.

It is a position he will hold for life. According to tribal tradition, any offspring of his and Dorrie’s will not become heir to the chieftaincy. Instead, his nephew (the son of his sister) will ultimately become his successor.

Dorrie, by association, is the tribe’s “first lady.”

To assist the needs of the village, Watson and Manu founded the To the Moon and Back Foundation that generates donated goods for shipment to Ghana.

“It was a foundation that was started upon the request of Eric made of me to come to Ghana for his coronation,” Watson said. “We made the foundation so that we could take something with us to the village which was a container of donations that mostly came from family and friends and a lot of my clients. Everybody went through their house and sent clothing, shoes, computers, school supplies… It only took us about six weeks to fill a 20-foot container. The stuff came pouring in.”

She said her employees would often return from a job site armed with bags and boxes of donated goods. Sometimes, she added, there would be so much offered that she would have to send an empty truck later in the day to collect everything.

A second container is now getting ready for shipment that Watson said should be ready either late this year or early in 2017. One donation that stands out among the rest was 200 boxes of clothing collected by a woman originally from South Africa.

“That was an amazing donation we received from her,” Watson said, adding the clothing was collected over a three-year period.

The story of Manu has exploded in the media. It began with local coverage, and has since been picked up by CTV News and CNN. People from as far as Korea and Poland and throughout Canada and the United States have been touched by the foundation’s objective and have lent their support to the project.

“It is amazing and it’s very heartwarming that people will reach out to you like that from just reading a story,” Watson said. “It amazes me. There are good, kind, beautiful people in the world who do that.”

The foundation’s top priority is to upgrade the village’s local clinic.

“It’s in dire need of being painted,” she said. “Hopefully we’ll get a new examining bed.”

Watson said the goal is to secure new bedding for the beds the clinic already has, but ideally to acquire new mattresses as well as examining tables and medical supplies. But, she said, “baby steps” are being taken for the time being. She said she hopes to return to Ghana “hopefully in February” to begin the much-needed paint job.

Manu said it is the hope to expand the existing building some day.

For more information about the foundation or how to help the charity, visit www.tothemoonandbackfoundation.com. The foundation also has its own Facebook page.