Features Agronomy
A sunscreen for your turf

A growing sunburn to the back of his neck as he watched his turf
wilting in the hot sun gave a former golf superintendent from
Pennsylvania an idea that would soon launch a new career for him.

Scott May, owner and president of Turf Max LLC, shared the benefits of a product he developed not many years ago with an audience of more than 300 golf superintendents and assistants attending the 24th annual Ontario Seed Company/Nutrite Professional Turfgrass Seminar in Waterloo in November. 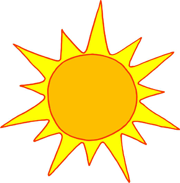 The product he conceived in 2006 while still superintendent at the Manufacturers Golf Club in Fort Washington, PA is a type of sunscreen for turfgrass, which helps protect it from harmful amounts of UVB radiation during the heat of summer.

On the day he conceived the idea for his new product, May recalled it was a sunny summer day with temperatures in the mid-80s Fahrenheit, and he found his turf was wilting. At the same time, he realized he hadn’t applied any sunscreen to the back of his neck, “and it was cooking.”

His staff had gone beyond syringing the fairways to get them to stop wilting, and then “a light bulb went off” at the end of the day. He gathered some sunscreen products and applied them to the plants at his poa nursery. In addition, he surfed the Internet to learn more about titanium dioxide and zinc oxide, the two active ingredients found in human sunscreen products.

He said he wondered why no one had previously thought of a sunscreen product for plants, especially after learning there were several other benefits to titanium dioxide and zinc oxide outside of solar protection.
“Generally, it’s a sunscreen for turf,” May said. “But it’s much more than a sunscreen.”

He said the epidermal layer of turf is not all that different from human skin, and when looking at the science behind its protection, it makes a lot of sense.

Leading turfgrass scientists have recognized that excessive UVB radiation is detrimental to a plant, he said, adding it damages a plant’s ability to photosynthesize and can lead to cell collapse and death.

Atmospheric conditions trigger this phenomena, and profound changes have been realized in recent years.
“Eight of the hottest summers on record have occurred since the year 2000. This isn’t a new pattern. It’s the new norm.”

May recalled when he was a child that he could spend several hours in the sun and never get burned.
“Today, you let your kid go outside for six hours, or even four hours, and they’re coming back with a burn.”
The depletion of the ozone layer is allowing more and more harmful UVB radiation to strike both human beings and turf. The changes in climate over the past several years has made the job of golf course superintendent that much more challenging, May said.

“I don’t think you can argue that it’s just getting hotter.”

The properties of titanium and zinc work as a reflectant, shielding the turf from UVB damage, but enough sunlight is still able to enter so that the plant can perform its intended functions.

When May first conceived the product, he wondered if it would fully prevent a healthy amount of sunlight from getting through to the plant.

“The more you investigate how titanium and zinc work, they actually allow enough sun into the plant to perform photosynthesis.”

During the heat of the summer, the plant can use only between 12 and 15 per cent of the sun, “so there’s a lot of sun that just gets turned into heat or stress that really is unnecessary during the high sky days.”

Testing of May’s Turf Screen product has been ongoing since 2009. It has been found that application of the product on turf has improved turf quality and reduced dollar spot by 30 to 50 per cent. In 2010, it was used on bentgrass in Pennsylvania. After two weeks, treated plants were of significantly better quality than those left untreated.

Tank-mixed with a fungicide, “it really outperformed and did fantastically well.” May said mixed with light fungicide rates, Turf Screen is a good fit with golf course management programs.

May had grown 95 to 98 per cent poa in the Fort Washington area when he was superintendent at Manufacturers Golf Club and said Turf Screen helped him tremendously in 2010.

“Turf Screen’s going to make your job a little bit easier and make your turf better able to handle the extremes.”

Aldo Bortolon, superintendent at Fonthill, Ont.’s Lookout Point Golf & Country Club, used the product on his course in 2012, applying it in seven-to-10-day intervals, starting in the spring and continuing through to his snow mould application in the late fall. He said the product noticeably helped improve his overall turf quality and density.

“This summer I noticed lower canopy and soil temperatures throughout the summer months, and more consistent moisture levels in the profile,” he said in a testimonial for Turf Screen. “I feel strongly that Turf Screen reduced our overall water usage and particularly our syringing and hand watering needs. Another noticeable benefit was that our disease presence appeared less, even through one of the more difficult seasons in many to control disease.”

“That means the sun that’s hitting that plant on May 15 is not killing that plant dead, but, over time, the continuation of sunny days and UVB stress over and over makes it photosynthesize less. If you have a stronger plant, and by using Turf Screen in a preventative regime, you’re going to be more successful.”

May said he recommends Turf Screen applications using lighter rates in seven-day intervals. If it’s applied once every two weeks, it is apt to “run out of steam” by the end of the second week. He likened the lighter rates in a seven-day cycle approach to applying sunscreen to the human body while at the beach.

“You get out of the ocean and that sunscreen comes off, so you want to keep applying it at lighter rates.”

When used in conjunction with growth regulators, Turf Screen can provide significant value to superintendents, he said. Mowing the product off is wasteful, he added, so if a surge of growth comes after ample rainfall, it is best to wait a couple of days before applying the product.

“Get your growth regulator out there and give it a couple of days to kick in, and then put your Turf Screen on and you’ll get the biggest bang for your buck.”

Turf Screen is not a “magic bullet,” May cautioned, and it’s not a matter of simply applying the product and watching your problems disappear.

“You still need to do the things you’re trained to do and educated to do day in and day out to be successful. Turf Screen is a really good tool to have in the tool box.”

In addition to Turf Screen is Turf Screen Dormant which is more of a dark green pigment containing some titanium and zinc and which has a distinct difference in colour from Turf Screen.

May said it will produce improved colour, improved plant health, and increased canopy and soil temperatures.
Turf Screen Dormant should be reserved for winter use, he said, or perhaps the early spring for quick greenup.

Turf Screen itself, as opposed to Turf Screen Dormant and other pigment products, is not an ordinary pigment, he added. He said he’s yet to hear anything negative from anyone who has used either of the products.

Its titanium and zinc content are safe ingredients, for both the plant and human exposure, May said.
“You can’t hurt anything with Turf Screen,” he said, adding the titanium and zinc are non-reactant and completely inert with only minimal amounts getting into the plant.

Turf Screen is distributed in Canada by Ontario Seed Company in Ontario, O.J. Company in Quebec, Even Spray in Manitoba and Brett Young in British Columbia.