80 per cent of the game is played on the infield

Even though a baseball stadium’s infield constitutes considerably less square footage than its outfield, the fact that more than 80 per cent of the game is played on the diamond itself demands that its maintenance needs are greater.

An infield is about 8,000 square feet in size while the outfield can range between 60,000 and 70,000 square feet. Only three players roam the outfield at any time during a game while six defensive players and as many as four base runners can occupy the infield at one time.

“With that amount of traffic and that small an area, it’s going to require that much more maintenance to keep it performing well,” Ross Baron, head groundskeeper for the Vancouver Canadians at Nat Bailey Stadium, says.

Baron addressed a gathering of sports turf managers during the winter’s Ontario Turfgrass Symposium in Guelph, suggesting the amount of play on a baseball field’s infield must reflect the degree of maintenance it receives.

Now that baseball fields have reopened for league play across Canada – as individual provinces relax their COVID-19 restrictions – stepped-up maintenance practices will be required to ensure playability and to keep the game safe for its players.

Baron, now in his fourth year with the minor league Canadians, said baseball infields need to address such key aspects as playability, aesthetics, composition and maintenance.

Playability addresses how the field performs, the degree of footing it provides, how it impacts sliding, its level of hardness and how well it allows the ball to bounce and roll.

Aesthetics addresses the infield material’s colour and the “pop” it provides for players and spectators.

Composition addresses the infield’s materials, including its sand-silt-clay ratio.

Maintenance addresses the daily practices required to ensure the infield provides consistency and safety for the players.

“A surface that’s too slow can create some difficult hops as well and change the direction of the hop.”

Bad bounces can come from transition lips, debris or pebbles in the infield mix. Inconsistent soils and large lips resulting from improper maintenance practices can create such safety issues as tripping hazards or the ball rolling off the lip and hitting a fielder.

“It’s a factor that can definitely affect the game.”

Baron said rakes should be used to remove pebbles from infield mixes “because if the ball hits it and it changes the direction of the ball so that the infielder misses it, you’ll probably hear from the manager afterward.”

An effective judgment used to determine if an infield is playing properly is the “cleat in, cleat out” approach, Baron said, noting a properly maintained skinned area should ensure that when a spiked cleat goes into the dirt and the foot is lifted, only the impression made from the cleat should be visible.

Whenever a weather event occurs, there will be a buildup of water and puddles which increases the time it takes to get the infield up and running again. With proper infield grading, surface runoff toward the outfield is encouraged. Baron said the industry standard is a .5 to one per cent slope.

“When every single player on the team has a hole in his sliding pants, you know you should start watering your infields a bit.”

Looking after the aesthetics of a baseball field’s infield is perhaps the easiest part of an overall maintenance program, Baron said.

“Just by picking the right conditioners with a colour that will contrast with your outfield grass – whether it’s a light green or a dark green – pick your material based on that so that you can make your infield really pop out, and it can contribute to the aesthetics of your grass as well.” 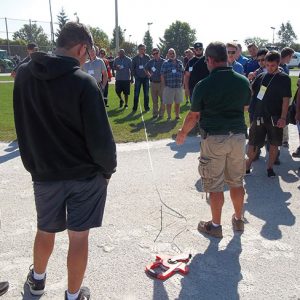 Municipal sports turf operators are instructed on the art of ensuring base lines are straight and true. 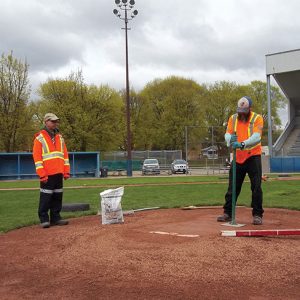 The pitcher’s mound is an important aspect of a baseball diamond’s infield. Like other skinned areas, it must have the correct sand, silt and clay ratios to contribute to the game’s playability and avoid ongoing repairs.

“If your sand ratio is too high and you don’t have enough clay in your profile, when you do repairs or roll your field or water your field, it’s not going to stick together the way it’s supposed to. It’s not going to bind.”

If the sand-silt-clay ratio is off, the damage to such high traffic areas as lead-off spots and sliding areas is going to repeat itself, “and you’ll be out there every day.” Paying attention to the ratios and making sure they’re correct will keep repair work at a minimum, Baron said.

At the semi-pro or professional level, the ratio should ideally be 60 per cent sand, five to 15 per cent silt and 20 to 35 per cent clay, Baron said.

“Maintenance requirements for that site are high because being a clay infield is going to require a lot of maintenance in terms of nail boarding and dragging to keep it level as well as watering to keep that clay moisture level right so that the field doesn’t harden up and crack.”

When sand levels are too high, the infield won’t hold moisture.

“You’re going to water that infield, but it’s too porous and the drainage is too efficient where it’s not holding moisture and it’s going to dry out.”

By the same token, he said, an infield whose clay content is too high will have the opposite effect. The infield will remain wet for too long and will be incapable of taking on an efficient amount of water to drain properly and still be playable.

User groups are often responsible for much of the post-game maintenance on municipal baseball fields which makes it important for sports turf managers to provide leagues and associations with proper educational standards that can be posted and studied.

“Trying to get rid of water by shooting it all onto the grass or onto the lips is not the answer. This can be avoided by having the right compositions in the infield so you don’t run into these water problems.”

Baron said because sports turf managers may not be able to do this themselves on all their fields, they will have to provide the proper education to their user groups.

Consistency must be achieved on infields, ensuring there aren’t contrasting high and low spots. Knowing how to properly use drag mats and nail boards to avoid high and low spots is imperative, Baron said, noting an improper technique can result in more material removed from low spots while excessive material remains on high spots. Field consistency prevents tripping hazards and promotes playability. Maintenance to the infield and transition areas accounts for about 80 per cent of a baseball field’s upkeep.

Baron said he works daily on the transition areas of his field and sometimes several times a day, noting that whenever a player steps on the edge, he is apt to push material in either direction.

Improper field maintenance practices lead to unsafe playing surfaces, he said. Maintenance staff can add to the problem if they’re not careful. If an edge is topdressed and rain allows the grass to grow through the material on that edge, over time the edge will continue to grow. If not addressed, the negligence will result in a tripping hazard and ball hop danger.

Baron said such a hazard can be avoided by running an aerator along the edge with subsequent rolling to decrease the soil density. Additionally, a sod cutter can be used to remove a strip as far back as necessary. The edge can be leveled and the sod put back in place.