Features Landscaping
37 years in business and counting for Guelph landscaper

James Walke has experienced it all over the decades. 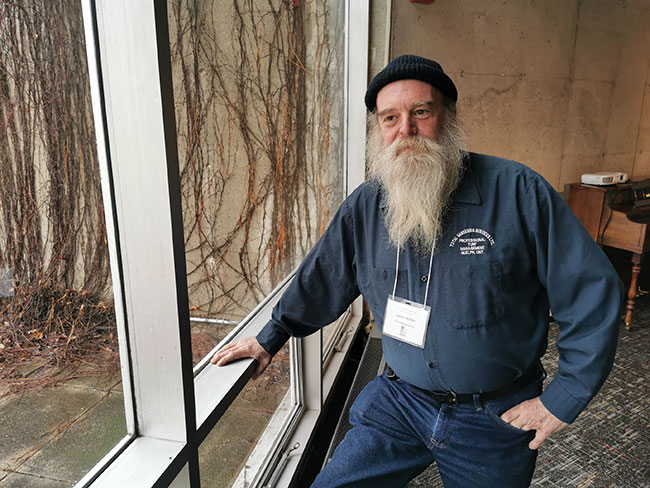 In his 37 years as an independent landscape contractor, James Walke has seen many others enter the industry and many others leave. He described it as a “revolving door,” sharing his story in February with other landscapers and lawn care professionals at the Ontario Turfgrass Symposium in Guelph.

“They come in and mess up our industry,” he said. “That’s one of the problems with our industry… that we’re not regulated. Anyone with a pickup truck and a lawn mower can say they do what we do, and they don’t.”

Walke founded his Total Gardening Services Ltd. business in 1983 while in his third year of university, studying philosophy and psychology. Intending to move on to law school upon graduating in 1985, he decided to take a year off to earn some money from his landscape maintenance business.

“Thirty-seven years later, I’m still on that year off.”

Walke said he occasionally asks himself if he should have pursued a law career, but said lawn care has been an interesting run. Over the course of his 37 years in the industry, however, he has made a number of significant changes to the business, including the choice to scale back, to no longer compete for tendered work, and to successfully adapt to the 2009 Ontario pesticide ban.

In the early 1990s, Total Gardening Services had grown to the point where Walke had a fleet of three trucks and 12 employees. But he didn’t necessarily view that as progress.

“I could not get the quality of workmanship out of the crew when I wasn’t on site.”

At the end of the 1992 season, he decided to sell his excess trucks and equipment and turn the business into a “one-man show.” Since then, he works with two full-time students in the summer and a part-time employee during the winter months, offering his customers a comprehensive snow and ice service.

During the business’ early stages, Walke had one employee who had been with him for 10 years, providing some consistency.

In spite of dealing with employee turnover and a scaled back business, Walke has enjoyed success over the years. Many of his customers have hired his services the past 25 years.

“If you can find that kind of loyalty going in your business, you’ll thrive.”

Although other contractors lay sod for their customers, not all of them roll it afterwards, he said.

“The two most important things in sodding, as far as I’m concerned, is water the crap out of it immediately and roll it to get root-soil contact.”

Without proper contact, he said, dead spots will appear. Because some other contractors don’t own rollers, they will undercut Walke’s business – a pet peeve of his.

Customers tend to be particular about the work being done on their properties, he said, adding it’s important for the contractor and his crew to fully understand the parameters of the work, including what can and can’t be done and what might “piss off” the client. Sharp edges and a contrast with mulch are among the expectations of customers.

Walke has been underbid on jobs over the years, but has subsequently been hired to finish some of those jobs to the customer’s satisfaction. He has fielded calls from homeowners who have given up on the idea of growing grass, often finding sections of lawns damaged by chinch bugs or European chafer grubs. Grub control is one service he doesn’t offer because they must be treated at the right stage in their development, and moisture levels in the soil need to be optimal.

Once the lawn is treated for grubs, it’s up to the homeowner to water it in, but people generally neglect the need to irrigate, he said. The best time of year for grub treatment is usually August when municipal water restrictions or bans are in place, and many homeowners can’t be bothered to pay for a watering permit.

“If I can’t guarantee my work, I’m not going to do the work.”

Instead, he suggests to his customers experiencing difficulties with their lawns to add clover.

“It’s going to fertilize itself, taking nitrogen from the air. When I was a kid, lawns never went brown in the summertime – ever – because they were 30 or 40 per cent clover. You put in clover, chinch bugs won’t eat it, white grubs won’t eat it, nothing’s going to eat it. Bees love it.”

Those who say they don’t like the white flowers from clover, claiming they look messy, are told that is their cue to mow, thereby solving the problem.

Pesticide ban
One of the biggest challenges he’s faced during his long career was the pesticide ban that came into effect in Ontario in 2009.

“I had a 25-year business that was quite successful and making money, and the pesticide ban came along and really yanked the rug out from beneath me and left me standing there, wondering, ‘What do I do now?’”

It took him a while to become accustomed to approved alternative products, but Walke successfully made the transition. He said lawns with ample weeds are sprayed first thing in the spring, followed by spot spraying each week afterward. If necessary, another full spray will be done four to five weeks after the initial treatment with spot spraying to follow.

“I’ll just do that until I have the effect that I want.”

Walke said the ban forced him to rethink and better market his business. One strategy was to secure high-end residential customers that included doctors, dentists and lawyers whose office properties could also be serviced.

Another successful means of attracting new residential customers is what he calls his “line of distinction” when fertilizing. Using a 25-5-15 fertilizer (65 per cent slow-release Polyon), he creates a straight line that separates a customer’s property from the neighbour’s. The strategy produces a vivid line that clearly showcases a lush, healthy lawn against one that is underwhelming.

“I get a lot of business off that line of distinction. I’ve been satisfying my customers and pissing off the neighbours for 37 years.”

Strategic branding is another means of attracting business, Walke said. When he first launched his business, he selected blue and white as his choice of colours for everything associated with his company, including his shirts, stationery, business cards and truck and trailer.

“It’s basically everywhere. It gives you a credence of reliability and an air of competence as opposed to having a white truck and a green truck and a black one.”

He said he finds it baffling that some contractors don’t put their company name on the sides of their vehicles.

Walke said it’s important to him to strike a balance between his career and his personal life. An accomplished singer, he is a member of three community choirs that account for 10 to 15 hours of his time each week.

“I made that conscious decision to balance work and enjoyment, and I’ve been able to maintain that for about the past 30 years.”

Walke said he is one of Guelph’s more expensive contractors, charging about $3,800 a season for a 2,000-square-foot residential property, but added if another contractor approached 90 per cent of his customers – offering to do the same work for 15 to 20 per cent less – “I bet they wouldn’t get the job.”