Kelowna, B.C. was the venue for the 13th annual National Awards of Landscape Excellence for the Canadian Nursery Landscape Association.

The event also saw the presentation of the B.C. Landscape Awards of Excellence. Among those in attendance included the CNLA board of directors, British Columbia Landscape Nursery Association members, representatives from Caterpillar Inc., DynaSCAPE Software, FCA Canada, HortProtect, Kubota, and other guests and sponsors. 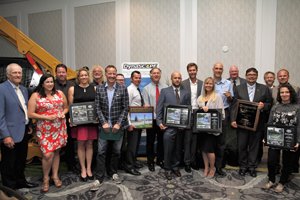 MP Stephen Fuhr announced the contribution of $1.1 million to grow the domestic and international market for Canadian ornamental horticulture. His announcement represented a significant investment in Canada's nursery and landscape sector expected to benefit the entire value chain, from the grower to the consumer. CNLA president Rene Thiebaud confirmed that the funding will be used in a variety of projects dedicated to increasing market exposure of Canadian ornamental horticulture products.

National judges received more than 50 entries in the landscape categories alone, where only five could be named national champions.

Harold Deenen was awarded the President's Award for his years of service and dedication to the both the association and the industry as a whole. Donnie Burke accepted the Green for Life Community Award on behalf of Nova Scotia Lands and the other groups involved in the restoration of the Sydney Tar Ponds into the beautiful Open Hearth Park.  Bradford Greenhouses Garden Gallery in Barrie, Ontario was named Garden Centre of the Year. Van Belle Nursery took home Grower of the Year and will compete in the international competition next year.